As climate science points to drier years to come, many across the planet are adjusting their traditional expectations of water supplies. Population and demand are also growing and new supplies will be needed.

In October 2016, representatives of the water industry from all over the world will meet in Brisbane, Australia for the International Water Association’s World Water Congress & Exhibition 2016. A workshop associated with the IWC arranged in collaboration with the International Desalination Association and Australian Water Association will address Australia’s response to challenges from demand growth, climate change and increasing weather volatility: Reverse Osmosis Membrane Desalination.

Australia faced the worst drought in living memory (which came to be known as the Millennium Drought) between 1997 and 2010. We applied a number of techniques including conservation, water trading, water recycling, stormwater collection and on-site greywater reuse. However, by a significant margin the largest response in terms of capital investment was a $15 billion program for potable water recycling and seawater desalination. This included the construction of six major seawater desalination plants in all five mainland state capitals and four potable water recycling plants in Brisbane. The complete program was delivered by the water utilities, including permitting, in the extraordinarily short timeframe of eight years.

While rain did eventually fall in the east coast of Australia, Western Australia continues with long-term reduction in rainfall over the past 40 years as a result of climate change. The Perth and Southern Seawater Desalination Plants have supplied clean, secure drinking water to residents since the first plant was completed in 2006. They currently provide around 145 ML (180,000 acre-feet or 38.3 billion gallons) per year which supplies approximately half of the drinking water for Perth’s 2 million people.

The Perth plant at Kwinana has a low velocity open water intake and discharges concentrate into Cockburn Sound, a confined body of water. If ever there was likely to be a problem with a desalination plant impacting the marine environment, it is here. The environmental regulator recognized this, and it has been one of the most-monitored desalination plants in the world. It has been operating at full flow for ten years with no evidence of environmental harm.

In addition, the Perth plant (like all the big Australian desal plants) has its energy consumption entirely offset by purchase of renewable energy. It is thanks to desalinated seawater that Perth will be able to continue to function sustainably in the long term. Indeed, it is a most livable city with extensive parks and gardens.

In the eastern states, the drought broke in 2010. Critics of desalination with short memories have been vocal. However, the desalination plants will be operating for at least 50 years, during which time there will inevitably be more droughts, growing demand and a likely drier and hotter climate. Due to dry conditions over last summer the Melbourne water storages dropped below 60% triggering an order for 50 GL of water from the Victorian Desalination Plant in the 2016/17 financial year – the first order for water since the plant was commissioned in 2012. Melbourne is one of the world’s 20 most livable cities – one of the factors is water security since the completion of the desalination plant in 2012.

Eastern Australia’s plants were built to guarantee water security in an increasingly volatile and uncertain climate, not necessarily analogous to the base-load desalination plants in Western Australia. Taking a long-term perspective, people generally recognize the significance of the climate resilient water sources afforded by desalination and water reuse and are reassured by the knowledge that they will always have water security, whatever the weather. The cost per household for this insurance against future water restrictions is relatively modest – in Sydney for example it is equivalent to the cost of a cup of coffee per week per household.

In the case of Adelaide, which has historically drawn water from the River Murray in times of shortage, this demand competes with agricultural demand. The provision of affordable alternative sources of urban water such as seawater desalination and water recycling ensures that inland regions and agriculture do not lose their water allocations to the big cities.

One of the important lessons we learned in Australia is the importance of developing a portfolio of water sources, with some of them being independent of weather and climate. So it is not a matter of having to choose between seawater desalination and water recycling, water conservation and stormwater reuse or economic instruments – it is wise to consider all of them.

Investment in secure sources of water like seawater desalination and water recycling can enable rapid and affordable solutions without adverse environmental impact. Such supplies are always available in times of drought and scarcity and will ensure that generations of people in coastal-dwelling cities will enjoy lifestyles that can rely on secure water supplies. 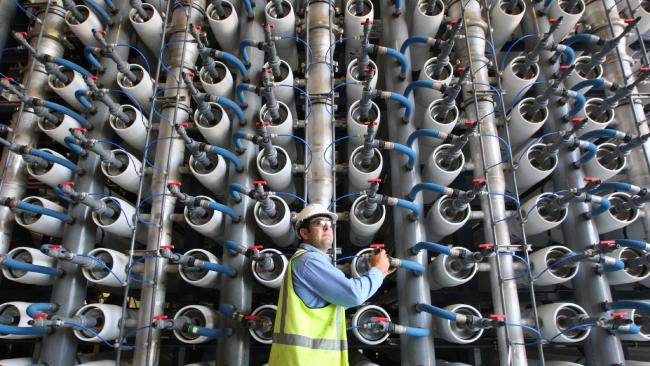 An inordinately high level of water losses – up to 50 per cent of water entering the distribution system – burdens water companies and customers in many dev...
SocietyUrbanisation
Tom Williams October 12, 2016

Two years ago, humanity passed a critical threshold. For the first time in human history more people lived in cities and urban areas than in rural areas. That t...
Africa
Sarah Tibatemwa May 17, 2017

The current drought ravaging parts of Eastern Africa and the subsequent famine triggered largely by failed rains is enough proof that water indeed is life. The ...