How Berlin is striving to rely on its own water sources

Four million people live in Berlin, the German capital. It is one of the most populous urban areas in Europe, which covers nearly 900 km². There is low topographic variation (30-70 m above sea level) and lakes and rivers comprise 6% of the city’s surface area. The flow in these surface waters is very low with a summer average of less than 20 m³/sec. 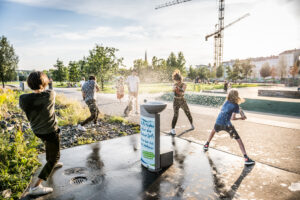 The objective pursued by the Berlin Senate is to adapt a management strategy, which allows the city to rely on its own water resources. The utility “Berliner Wasserbetriebe” is responsible for supplying and treating drinking water and recycling wastewater in the city. For more than 100 years the water supply has been designed to be replenished by surface water through bank filtration and aquifer recharge via infiltration ponds. Due to the low natural discharge in its rivers, treated wastewater contributes significantly to the overall flow, thus generating a partially-closed water cycle.

Sustainable water and wastewater treatment and recycling are of growing importance worldwide. In order to reduce the pollution of surface waters and release the pressure on the urban water cycle, Research & Development (R&D) projects have been funded by the German Ministry of Education and Research (BMBF). As a reliable and drought-proof alternative to potentially impaired freshwater resources, recycled water can assist in meeting the increasing demand for potable and non-potable water supplies. The R&D projects aim to develop new multi-barrier treatment processes for planned potable water reuse schemes. This new process will augment existing drinking water resources using high-quality recycled (waste)water while protecting public health and groundwater qualities. The benefits of environmental buffers are also used for the periodical storage of water. Additional benefits of recycled water use include further polishing of effluents, the conservation of wetland ecosystems and wildlife habitats, the use of energy crops as well as recreational uses. 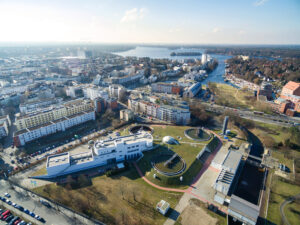 The surface water treatment plant “OWA Tegel” is a downstream purification stage after the wastewater treatment plant in Schönerlinde to protect the lake “Tegeler See”. Thanks to the the inhouse R&D-department of the water utility we could research innovative technologies for even further purification in full-scale – Here: A huge silo with activated carbon (© Berliner Wasserbetriebe / Reiner Freese)

Do you want to know more about Berlin's Water-Wise Story?

Renaturation for river basins and protection of surface waters

Berlin has a vision of a livable city, which ensures renaturation for river basins and protection of surface waters. Berlin’s goal is to create a city-wide network of landscaped streets and linear parks, which link the city’s neighbourhoods to one another and to the major parks (about 18%) to ventilate and absorb extreme storm weather (e.g. Gleisdreieck). Neighbourhoods and buildings are constructed on the principle of a “sponge city”, which means urban areas are structured and designed to absorb and capture rain water and utilize it to reduce floods. Key strategies for water-sensitive urban development will prevent extreme weather events – e.g. flash floods, cloud bursts and urban heat waves – by using and combining different processes such as percolation, evaporation, storage, retention, ventilation, shading and cooling. These measures will decrease the negative effects of combined sewer overflow and urban heat islands.

How to achieve this vision?

The Berlin senate focuses on sustainable integrated water resource management and has the overall objective to achieve and maintain a high quality of surface and ground water.  The measures that the city implements to reach these goals are based on and justified in the European Water Framework Directive (EU-WFD), which is an exemplar of modern environmental regulation. Berlin is for instance actively involved in the sustainable management of river basins and in implementing eco-services such as the restoration of moorland and creation of water protection zones to ensure groundwater replenishment.

Communicating with citizens and urban planning

Communication with stakeholders on the measures being implemented to develop a “sponge city approach” is organized by the “Regenwasseragentur” (English: rain water agency) through “City Talks” where the impacts of e.g. “green roofs” and natural based solutions – which serve as an additional resource for summer droughts – are discussed and explained.

Flussbad Berlin – An agenda for the city

The Flussbad Berlin (http://www.flussbad-berlin.de/) is an urban development programme created to foster a joint and future-oriented use of a section of an innercity waterway running through the very centre of historical Berlin. Along this roughly 1.9-kilometre stretch of water known as the Spree Canal, the plan involves creating a biotope landscape and a section for the natural filtering of the river water. In the adjacent section, which runs for roughly 850-metres of the canal, openair staircases will provide multiple-point access to the water and invite visitors to take a swim.

Sharing of knowledge and creating networks

The six infrastructure utilities responsible for water, waste, public transport, electricity and gas created a Co-Working Space called “InfraLab Berlin”, where they work together with the Senate of Berlin, start-ups, SME’s and institutes. The InfraLab Berlin offers young entrepreneurs the opportunity to experiment, test and realize their ideas with the help of competent people with an industrial, scientific and political background. This network of expertise promotes better communication, cooperation and knowledge exchange by offering regularly conferences and workshops which lead to innovative ideas and projects for a smarter, more sustainable and liveable Berlin.

Commitment to a climate resilient future

Since Germany is committed to achieve the goals from the Paris Agreement (2015) all utilities of Berlin signed a “Climate Agreement” with specific measures to work actively together with the senate to achieve the goal of 40% greenhouse gas (GHG) reduction by the end of 2020. Berliner Wasserbetriebe is responsible for treating drinking water and wastewater but also for recycling phosphorous in the sludge cycle and already achieved a reduction of 30% GHG between 1991 and 2005. The next goal will be to implement energy self-sufficient wastewater treatment plants.

No other metropolis offers so many opportunities for swimming in natural waters like Berlin. There are 39 official bathing sites suitable for swimming, which are monitored regularly during the warmer months when people access these areas. However, water pollution in rivers can be especially high after heavy rainfall, impacting river bathing sites due to discharges from the city sewerage system (combined sewer overflows and non-disinfected secondary effluent from wastewater treatment plant).

For Health protection a model which includes the development of a website was created to inform Berlin’s population and visitors on the water quality at the official bathing sites. This early-warning tool is based on multivariate regression modelling, using data from combined sewer overflow and weather forecast. This model gives people who plan to swim in these official bathing sites the information whether it is safe to swim. This early warning system is also a smart and efficient tool to help Berlin open and communicate information on new bathing sites to the public.

4 Levels of Action - Berlin’s Progress Towards the Principles

Regenerative Water Services for All

All Berlin utilities signed a “Climate Agreement” to reduce green house gas (GHG) by 40% the end of 2020, becoming a climate neutral city by 2050.

Communication with stakeholders through “City Talks” on the application of approaches such as green roofs and mobile technology, e.g. the web based early warning system for bathing water quality information.

Quantification and Modelling of Fugitive Green...

With increased commitment from the international community to reduce greenhouse gas (GHG) emissions from all sectors in accordance with the Paris Agreement, the...
Africa
Boris Mbia December 8, 2020

[For French version, please scroll down / Pour la version française, veuillez faire défiler vers le bas] One experience that lives with me to this day was the...
SDGs
Rui Veras September 7, 2020

Adam Lovell started his career in the water sector over 20 years ago as a Chemist at Anglian Water and is now the Executive Director of the Water Service Associ...