Bring on the Rain

How the Dutch are mainstreaming adaptation through an integrated network approach

Cycling through the Rain

Since a cloudburst in the summer of 2014 and many more severe cloudbursts since then in other regions of the Netherlands, the urgency for a way to adapt this buzzing international city grew. Hence Waternet, the well-known innovative water utility of Amsterdam and its surroundings, created Amsterdam Rainproof. It is a promising program which has grown significantly since its inception, and now mainstreaming this program in all planned physical activities is a major challenge for the city. 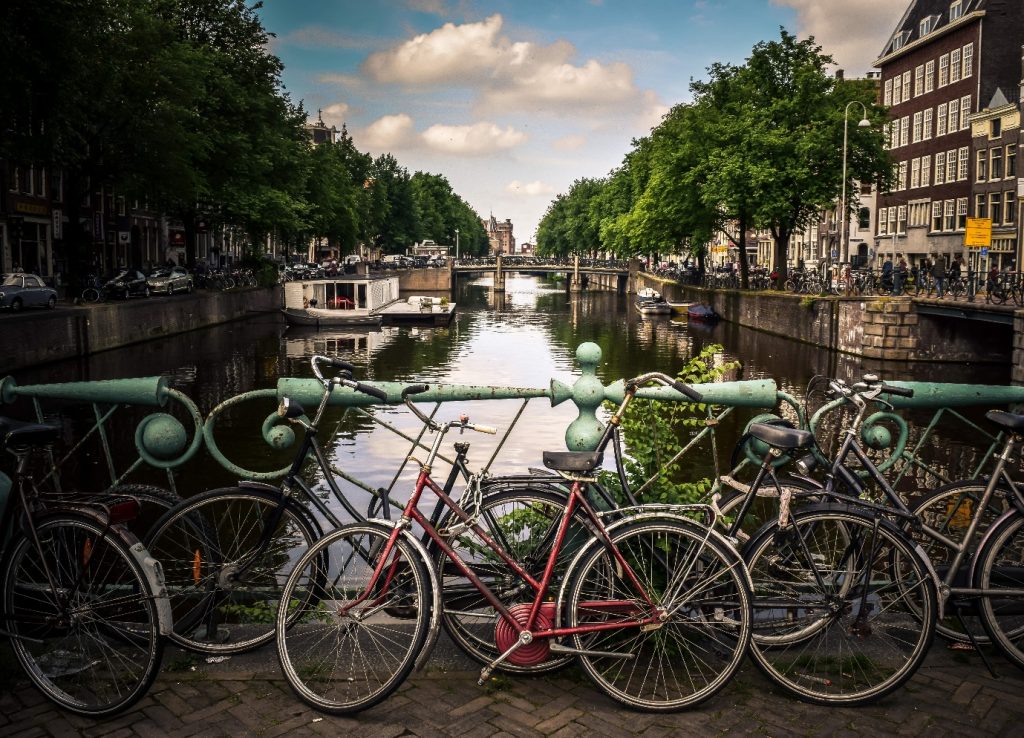 What is Amsterdam Rainproof?

The Amsterdam Rainproof platform is a unique collaborative network of public administration entities, entrepreneurs and citizen initiatives. Together, they are committed to making Amsterdam more resilient to extreme rainfall both on the small and large scales in its buildings, gardens, and public areas. To start the Amsterdam Rainproof network, Waternet initiated a special programme from 2014-2017 which actively facilitated and supported all relevant stakeholders in the city. Through dialogues, events, demand driven tool development, and coaching, more than 60 stakeholder organisations are now committed and more than 50 physical rainproof projects have been realized.

One example of the Amsterdam Rainproof program in action comes from a unique Dutch invention: the Polderdak (Polder Roof). The Polderdak, a Dutch invention from the Dakdokters (The Rooftop Doctors), is a roof garden which also serves as an efficient space for water storage. It is surrounded by a small dike with a remote controlled weir. After a rainfall event, the water flows slowly through the openings in the dike, and flooding is greatly reduced.

The foundations for a city around water

Amsterdam has lived with water for more than 700 years. The city was founded in a strategic location on the edge of the river Amstel and the sea in the low-lying delta of the Netherlands. Coping with water challenges is in the DNA of the Netherlands and its capital city Amsterdam. The city has been able to grow to a safe, attractive and economically healthy urban area because of smart investments in control of flood risks and water quality, and in robust water infrastructure. Amsterdam and the Regional Public Water authority Amstel, Gooi and Vecht have entrusted all their water management in Waternet, the public integral water cycle organisation, for management of drinking water, waste water, surface water and flood control, working in an efficient, sustainable and customer-oriented manner. Waternet takes the lead in new collaborative platforms working across urban challenges such as climate adaptation and the circular economy.

Amsterdam has a very robust protection and emergency control system for floods from the sea and river, as well as from extreme rain events.  Better protection of critical infrastructure to flooding is key to the resilience strategy of Amsterdam. Some areas of action include: 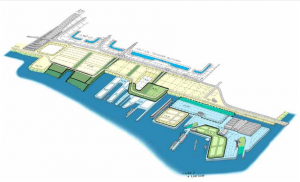 Contributing to the circular economy from the water cycle is the second key challenge in Amsterdam. Many opportunities for recovery and recycling of energy and resources from wastewater, drinking water or surface water exist, yet depend on collaboration and implementation between and among other urban stakeholders. In a city with a quickly growing population and rebounding housing market, it is difficult to make circular ambitions come true. Yet, the Rainproof project helps to achieve some circular outcomes in the city, with close collaboration for resilience with urban planning, energy services, waste services and mobility. One good example is the Hemelswater: Code Blond beer! Brewed from rainwater from the roofs of Amsterdam, this project helps to reduce water used for brewing and reuse the excess rainfall.

The Amsterdam Sustainability Agenda also shows political will for circular economy approaches in the city. 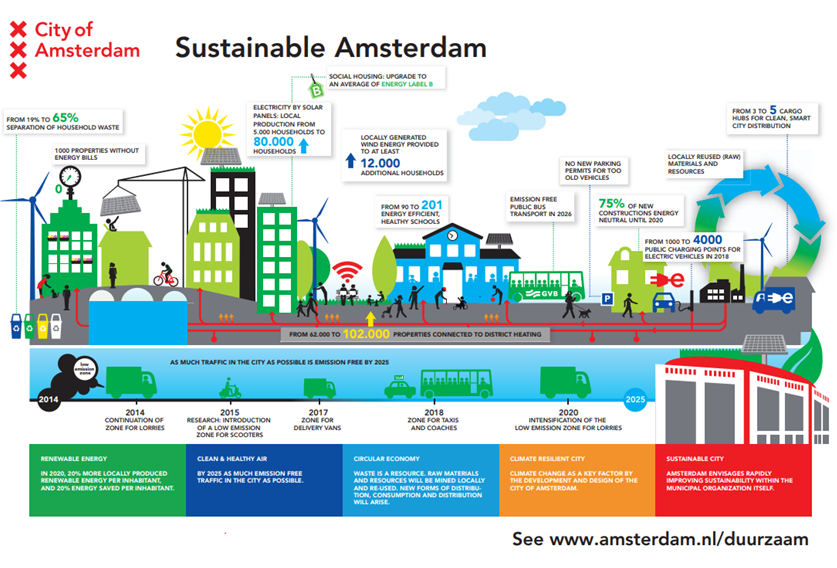 Coming to an end this year, the Amsterdam Circular Innovation Programme 2016-2018 works in a public private collaboration towards an Economically Sustainable Region by 2030. The hope is that “the projects from this innovation program will result into accelerated insights in the transition towards a circular economy.” Stay tuned to find out which projects the municipality will select to implement!

The Polderdak, a Dutch invention from the Dakdokters, is a roof garden which also serves as an efficient space for water storage. It is surrounded by a small wall (“dike”) with a remote controlled weir. Water can be stored in crates, on which the vegetated layer rests. Unique to the Polderdak is its multifunctionality. Co-benefits are 10 to 30% energy savings; biodiversity and urban farming opportunities; cooling urban heat and capturing particulates. The Polderdak South Axis pilot project (2013), with a 1200 m2 and 84 m3 minimum water storage capacity, has inspired other bigger polder roofs in the same part of the city with many more to follow. 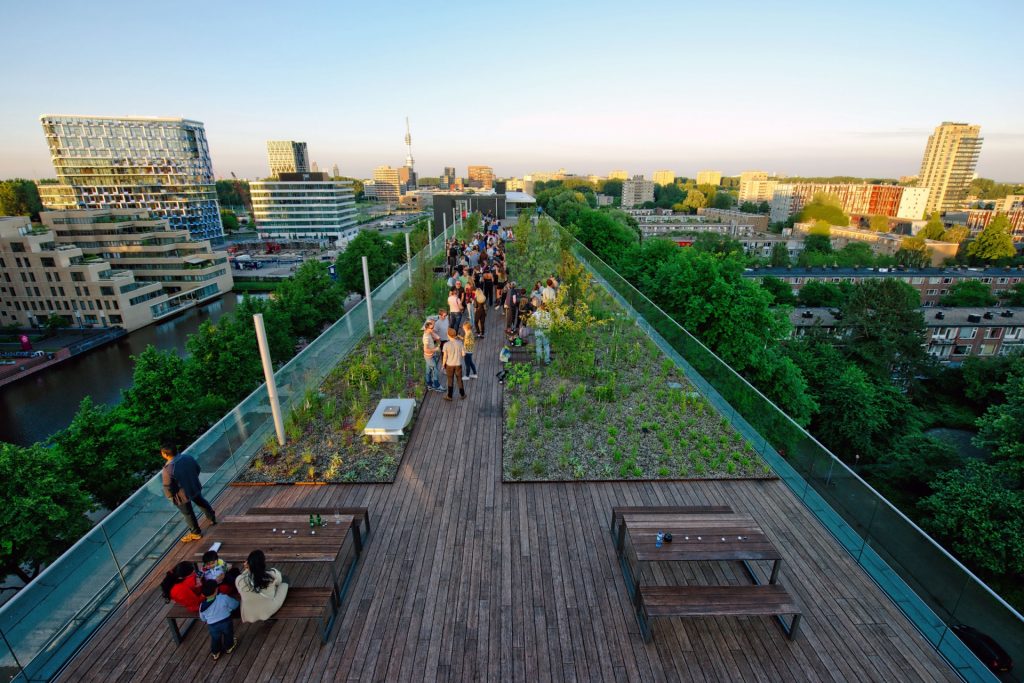 4 Levels of Action - Amsterdam's Progress towards the Principles

The unique integrated water governance in Amsterdam is based on efficiency, sustainability and customer care. Resilience and GHG reduction targets are based on collaborative public and private efforts. Rainproof network governance is best fitting for the shared public-private ownership of this challenge.

Sewerage plan 2016-2020 with the urban ambition level for resilience. This ambition replaces a formal service level for the municipality, but justifies both public projects and the initiative for the Rainproof platform.
Green agenda and fund. Rainproof is a criteria to get funding.