For most of the world’s one billion low-income urban dwellers, water is undrinkable. Even when accessible municipal water is relatively safe, faecal bacteria contaminate the water as it is dispensed at shared water points and subsequently by ‘people as infrastructure’ who carry it to their homes. We know of many adverse consequences for the dwellers and the wider society when poor sanitation meets drinking water. Further troubles may be forthcoming.

Policymakers have signed-up to ambitious targets, such as Sustainable Development Goal (SDG) Target 6.2 and Citywide Inclusive Sanitation. These underline that safe sanitation is a precursor to safe water and that urgent action on sanitation is needed. Yet, achieving safe sanitation at scale remains a challenge. UN data shows that we are seriously off track to ensure safe toilets for all by 2030. With only eight years left, the world needs to work four times faster to meet the objectives.

Classed as offering limited sanitation services, shared toilets within low-income settlements are often left out of official sanitation improvement programmes. This remains a key challenge. However, encouraging new research in this area reveals many positives that are missed as a consequence of such policy neglect, including climate change mitigation potential in sanitation via off-site composting of human waste. This article introduces our research-driven, inclusive concept of connecting toilets in low-income settlements to a safe circular water economy. The idea was recently debated at an international symposium at Lancaster University, and subsequently presented in September 2022 at the IWA World Water Congress & Exhibition during a workshop on ‘Learnings from inclusive urban sanitation initiatives’ organised as part of IWA’s Inclusive Urban Sanitation initiative. 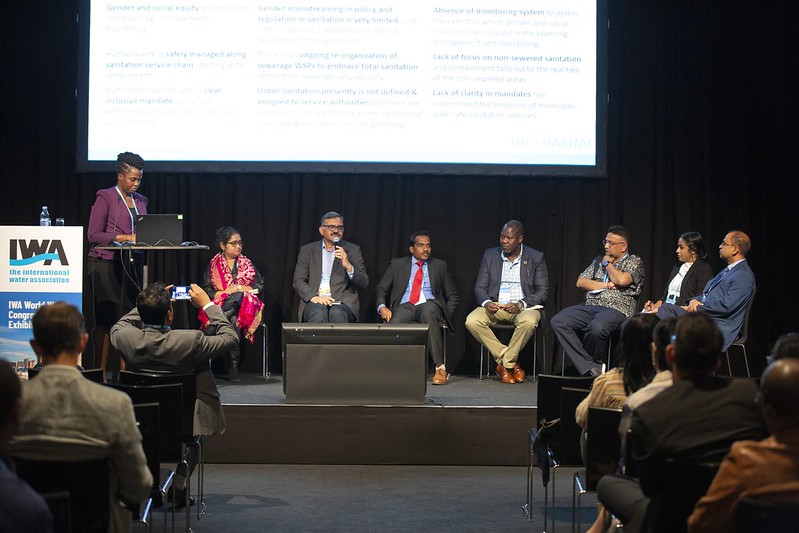 What does circular processing of faecal matter mean to us?

This means connecting all available toilet facilities inside low-income settlements to a safe circular water economy. Activities may include maintaining the technical integrity of the toilet facilities, regularly collecting/emptying and safely treating the faecal matter, valorising the end-products, and undertaking a complementary suite of empowerment and capacity building initiatives. Working for, and with, communities, across scales, and involving industries is vital.

We hosted around 100 members of the WASH community at a two-day symposium at Lancaster University, UK in March 2022. The event built on research and networks from the ACTUATE, RECIRCULATE and Last 100 Metres projects in Bangladesh, Ghana, Nigeria and Tanzania. Other symposium participants drew on projects including Brown Gold, Circular Economy for Sanitation, SOS and IWASH.

With >80% of symposium participants coming from Asia and Africa, the event fostered South-South knowledge exchange. Contributions from a range of perspectives led to lively interdisciplinary debates during the hybrid event. To find out more about the event, take a look at the symposium proceedings and short documentary (with/without sub-titles).

Participatory, community-based, educational approaches have an important role to play, not least to better align sanitation with the everyday realities of the direct users.

These approaches enable communities to ‘see, learn and own’ the social, economic and environmental value of safely managed faecal waste e.g. the potential for capturing greenhouse gases, producing bio-energy and creating soil-conditioner as valuable end-products coupled with the associated health benefits of reducing faecal contamination.

Putting the approach into operation will require a concerted and sustainable set of actions to optimally capture/remove faecal matter from, and prevent faecal contamination within, informal communities.

To be sustainable, innovative education pathways are needed to ensure that invisible faecal contamination is ‘made visible’ to ordinary people, those tasked with water provision, and those with a mandate to set global agendas.

This ‘visibility’ could be scientific, perhaps involving community youth and classroom experiments so that the next generation can then help educate their peers as well as parents. This could involve education through art, drama, show labs or cultural practices.

What is demanded is a sanitation strategy built on rigorous interdisciplinary analysis that – like the provision of clean drinking water – is a cause for celebration and pride. A key action is to turn water for sanitation into a more compelling policy issue for politicians, the mass media and civil society. To do so, IWA has launched an Inclusive Urban Sanitation initiative.  The initiative aims to reshape the global agenda on urban sanitation and is being promoted through a dedicated campaign – SanitAction – to gather the support and collaborative action needed to secure progress. Engage with us and join the conversation online using #SanitAction.

We acknowledge our funders (RECIRCULATE, ACTUATE and Last 100 Metres), our network of research partners, the symposium attendees, and our respondents on the ground.

Lancaster University, UK
Manoj is a researcher-activist, to complement his role as a lecturer in sustainability at Lancaster University. He specialises in advancing our understanding of everyday challenges that ordinary people experience, and in experimenting with ways that ... Read full biography
Circular EconomyHydrologyWastewater
Jörg Vogel September 2, 2022

Save groundwater and start drinking wastewa...

You can turn wastewater straight to drinking water instead of taking a detour through nature. That seems like a bold statement for the average person, but in re...
Circular EconomyClimate changeWater Supply
Helle Katrine Andersen et al. November 22, 2022

Utility community comes together to innovat...

The Utility Leaders Forum (ULF) organised by IWA is an excellent platform for utility leaders to meet, expand their network and exchange knowledge among utility...
Circular EconomyTechnologyWastewater
Johanna Johnson September 14, 2022

Logan Water has pioneered an Australian and most likely a world first; a facility which transforms biosolids into renewable energy and a sustainable product cal...
Sorry ! This author has no more posts.