One year since their endorsement, where are the cities now?

In 2016, ten cities endorsed the IWA Principles for Water-Wise Cities at the IWA World Water Congress in Brisbane, Australia. This official signing signaled their dedication to undertake actions to improve resilience to floods, droughts and the challenges of growing water scarcity, and to integrate water in city planning to provide increased liveability, efficiencies, and a sense of place for urban communities. Eight months later, the city of Gothenburg, Sweden, hosted the IWA Cities of the Future Conference – Embrace the Water, where more cities showcased their commitment to the Principles, such as the Mayor of Gothenburg, Ann-Sofie Hermansson.

In October 2017, one year on from their endorsement, we asked the ten original endorsing cities what progress they had made along their water-wise journey. Here are some highlights from Gothenburg, Sweden, Kunshan, China and Lyon, France.

Gothenburg: Becoming water-wise is their prerogative

Collaboration is key in this Swedish city. With improved resource allocation and alignment across departments, Gothenburg is sure to make an impact with and for its citizens for a water-wise future.

Since the city’s formal endorsement in their hometown, Gothenburg has revitalized and renewed activities within its departments. Roles and responsibilities of urban actors have been realigned to ensure best practices in urban water management. The municipality has even employed Serious Gaming to help departments build capacity and improve planning processes for stormwater and heavy rainfall.

The coordination of all departments related to urban water services has been supported by re-allocated compensation outside of the usual water tariffs to harmonize water service provision and reduce impacts from heavy rainfall. As part of this, the municipality has signed an agreement with the Traffic Office on better coordination and management of stormwater and cloudbursts. These new mechanisms will provide further concerted efforts towards Gothenburg’s slogan “The Best City when it Rains!”

With growing populations and concerns over water quality, security and impacts of climate change, the city of Kunshan has been rethinking its urban resilience strategy. Since the Endorsement of the Principles, the city has designated 22.9km2 as Sponge City demonstration area, and developed a related policy system to be implemented. This is also known as the “Kunshan Sponge City Special Plan” and is expected to be completed before the end of the year. This initiative has been jointly approved by several urban stakeholders, aligning the urban water vision across the city. They include the Kunshan Bureau of Planning, the Bureau of Housing and Urban-Rural Development, the Bureau of Water Resource, and the Bureau of Transportation.

Cooperation with international partners has also been key in supporting the shift to a Sponge City. Kunshan has been inspired by the Australian water sensitive city and PUB Singapore ABC programs and has signed a strategic agreement with the CRC for Water Sensitive Cities (CRCWSC). Through this cooperation, Kunshan is building capacities for their urban workforce through trainings offered by the CRCWSC. Many new urban actors will be trained in Sponge City development, including construction contractors and supervision companies.

The Sponge City transformation will bring about many benefits for the urban environment and its citizens. Peak flows during heavy rainfall events will be mitigated through biofilters incorporated into roads that also treat the stormwater. Public space will be transformed into multi-functional areas for water quality management, increased biodiversity and flood detention. One example is the transformation of an old garden nursery into an organic farm. It will include self-contained stormwater harvesting and reuse systems to minimize agricultural pollution to the surrounding environment.

Many challenges still lie ahead, yet, the city of Kunshan is ‘greening’ the way to a water-wise future by creating a water-wise enabling environment for success!

Check out this video to see what Kunshan has been doing along their Water-Wise journey!

Spreading the vision far and wide is vital to strengthen efforts towards urban resilience. A resilient city vision including water enables people to work together at different scales and across disciplines. It moves stakeholders out of their silos to defining a set of common drivers for the greater benefit of the urban community, and this is precisely what Lyon has done.

The Lyon Metropole first endorsed the Principles in 2016, but they have been working tirelessly to promote the vision with support from Graie and INSA Lyon. In September 2017, they hosted an official Principles endorsement, gathering 12 regional stakeholders to embrace the water-wise vision. Of the twelve stakeholders who endorsed, the Director of INSA Lyon, Eric Maurincomme, discussed why it is so important for educational institutes to support interdisciplinary initiatives for future engineers to become inspired.

“INSA Lyon supports and endorses the IWA Principles for Water-Wise Cities because it is essential that the future engineers we are training possess an integrated, interdisciplinary and sustainable vision of water management, including ethical and social responsibilities inextricably linked to their technical expertise. INSA Lyon signs onto the Principles because they correspond to the institute’s vision for research, most notably that of the laboratory Environment City Society, which is one of the five societal areas our research focuses.” Translated from French. 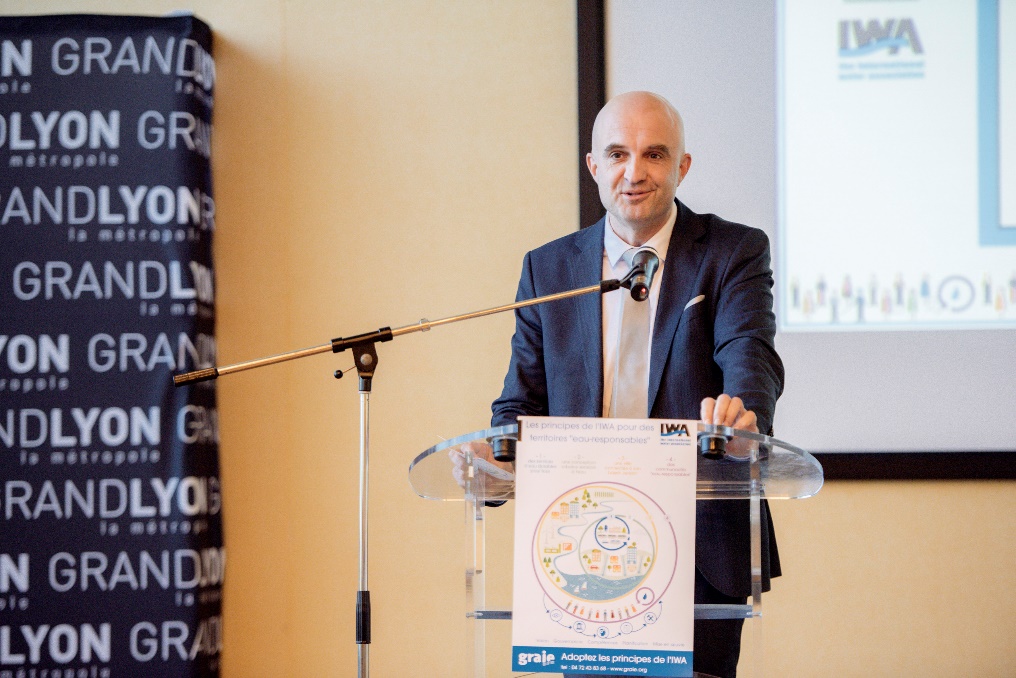 What’s next for the region? Two more official Principles Endorsement ceremonies rallying forces all across France! Stay tuned and contact us if you are interested to host a regional endorsement ceremony in your city!

Join us at the IWA World Water Congress and Exhibition in Tokyo, Japan this September where the Water-Wise vision continues. IWA will have a Water-Wise Pavilion to take you on the journey of IWA’s activities. The Pavilion is powered by IWA Strategic Partners Arup, CRCWSC and SIAAP, and will host the launch of the IWA Basin Action Agenda, as well as official endorsements from cities, organisations and utilities.

The resilience of cities is complex and relies on many components working together. The ability to recover and thrive after a shock or a slow change, relies on ...
Climate change
Paul Davies July 22, 2016

A fiscal measure for flooding?

Flood mapping is increasingly used as the basis for assessing and planning flood-protection measures, and can become a sound method to enhance the preparedness ...
SocietyUrbanisation
Hong Li April 13, 2015

Innovation in the Water Sector, Driving the...

Collaboration is key to seizing the reuse o...

Infrequent or a lack of potable water supply has made wastewater reuse and recovery a method of choice for many across the globe. Whether it has been for hundre...
AfricaClimate changeSocietyUrbanisation
Lisa Andrews December 2, 2016

I recently worked on developing the Dakar City Water Story as part of the IWA’s Cities of the Future Programme. Learning about Dakar’s well-established urba...
Climate changeUrbanisation
Lisa Andrews July 19, 2016

Populations are growing and urban areas are expanding. If UN projections are correct, in 2050 there will be over 6 billion people living in cities, roughly two ...