Pictured above: Mr. Ts.Torkhuu, Chairman of USUG (left) and Mr. Michael Klecheski, U.S Ambassador to Mongolia (right). The ambassador is shown presenting the USUG AquaRating certification seal to the chairman.

IWA recently hosted two AquaRating Certification Workshops for Ulaanbaatar Water Supply and Sewerage Authority (USUG) and the Housing and Public Utilities Authority of Ulaanbaatar (OSNAAUG). This forms part of Mongolia’s efforts to assess and enhance performance of their water and sanitation service provision in capital Ulaanbaatar.

AquaRating is one of the activities in the Water Supply Project supported under the Mongolia Water Compact. The Compact was designed to address the problem of limited, long-term sustainable supplies of water for Ulaanbaatar. It was signed by the Government of Mongolia and the Millennium Challenge Corporation (MCC) in 2018.

The AquaRating Certification Workshop for USUG was held on 26 and 27 January 2021. Mr. Michael Klecheski, the U.S Ambassador to Mongolia, provided the opening remarks for the workshop, as well as Mr. Zorgit Saruulkhangai, Deputy CEO of the Millennium Challenge Account (MCA) – Mongolia. 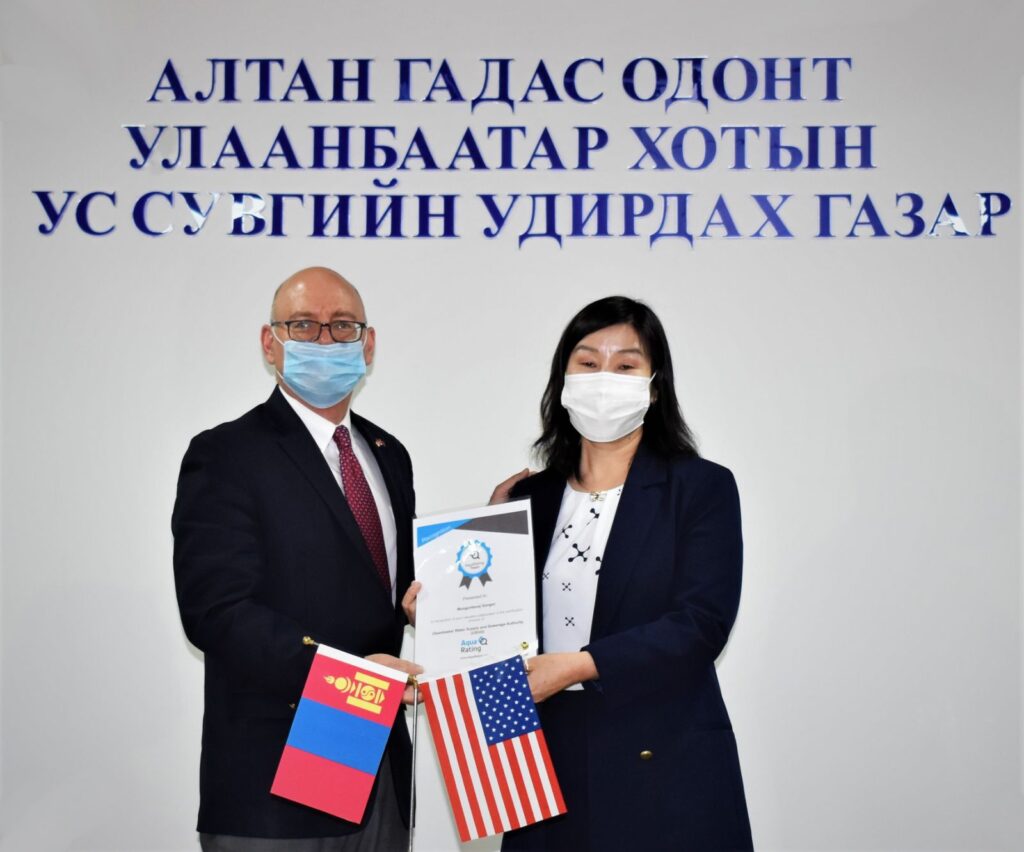 The workshop was attended by a range of key stakeholders including Mr. B. Munkhbaatar, the Acting Minister for the Ministry of Construction and Urban development (MCUD); Mr. T. Gantumur, General Manager of Ulaanbaatar and Head of the Mayor’s Office; and Mr. J. Sandagsuren, First Deputy Governor of Ulaanbaatar. Others included Mr. Alex Russin, MCC Resident Country Director; and Mr.  Eric Guetschoff, MCC Deputy Resident Country Director.

In both Workshops, presentations were made that highlighted the characterization report and the baseline for planning, as well as an efficiency and benchmarking analysis. Opportunities for improvement and recommendations were also presented.

Both utilities received an AquaRating Seal of Certification, valid up to 2024. Staff from both utilities, who were members of the respective AquaRating teams, were also awarded certificates of recognition for their work.

The workshops concluded that an updated AquaRating analysis of the Ulaanbaatur municipality for 2021 would be very useful, alongside forecasting of the impact of existing and planned measures and actions. This would ideally be a simplified process, carried out within one month.

Furthermore, it was suggested that focused analysis on innovation management would be very useful, with the development of an innovation and transformation plan to then follow.

More information on this can be found here – https://mca-mongolia.gov.mn/en/news/press-news/aquarating-certification-workshop

Lakes in Malaysia (both natural and artificial systems) provide much of the water that Malaysians drink and use to nourish their land, to grow and produce their...
SDGs
Kirsten De Vette May 26, 2020

At my kitchen table I sat when I received the invitation to be on a panel about Gender Matters: Organisational Implementation and Capacity Development during th...
DevelopmentSanitationSDGs
Jay Bhagwan November 9, 2022

SanitAction: a sustainable and inclusive sa...

Lack of innovative sanitation technologies is one of the reasons why the world is making poor progress towards the SDGs in the provision of safe sanitation for ...