Two outstanding experts have been announced as winners of the IWA Specialist Group on Microbial Ecology and Water Engineering’s 2021 Ardern-Lockett Prize and IWA MEWE Early Career Researcher Award during an online session held on 20 October at the IWA MEWE conference. The awards recognise outstanding contributions to research and practice in the field of microbial ecology and water engineering. 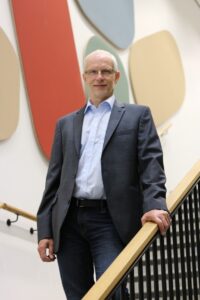 Prof. Per Halkjær Nielsen heads the multidisciplinary Center for Microbial Communities at Aalborg University, Denmark. He has a background in Chemistry, Environmental Microbiology, and Engineering and has been active in environmental biotechnology for over 25 years. The main focus has been microbial ecology of biological wastewater treatment systems, bioenergy production, and recovery of nutrients. He has been among the pioneers in the development and implementation of the new DNA sequencing technologies in the water engineering field and has studied in detail the community composition and ecophysiology of process-critical members. He has had many important research contributions over the years, including the importance of extracellular polymer in flocs and biofilms, identity, and ecophysiology of novel filamentous bacteria, PAOs, GAOs, and many others, where he contributed to the discovery of Comammox. In 2006 he launched the MiDAS project, the microbial database of activated sludge microorganisms, and a collaboration with more than 50 Danish WWTPs. Later on, anaerobic digesters were included and today it has grown to MiDAS Global, an open online microbiology resource for everyone working in the wastewater treatment and anaerobic digestion area to provide a unifying reference database and taxonomy based on data from more than 750 WWTPs. The development of novel methods to retrieve high-quality metagenome-assembled genomes has provided a unique insight into the metabolic potential of most key players in activated sludge systems, and FISH combined with Raman microscopy have validated many theories. He has also given ground-breaking insights into the importance of immigration for the assembly of microbial communities, both in digesters and activated sludge systems. He has been active in the IWA Specialist Group on Activated Sludge Population Dynamics (ASPD) since 1989 and was chairman from 2005 to 2013 during which its focus broadened and the name in 2009 changed to the Specialist Group on Microbial Ecology and Water Engineering (MEWE). Presently, he is chairing the IWA BioCluster and is active in the IWA Strategic Council. He has published more than 300 peer-reviewed papers and received many awards for his contributions, including the Order of the Dannebrog from the Danish Queen. Dr. Jianhua Guo is the Deputy Director of the Australian Centre for Water and Environmental Biotechnology (formerly AWMC) at The University of Queensland, Australia. His research focuses on the effective integration of environmental engineering, environmental microbiology, microbial ecology, and environmental biotechnology to develop sustainable solutions to address environment and energy challenges. He and his colleagues have enriched and characterized the co-culture of ammonia-oxidizing bacteria, anammox, and nitrite- or nitrate-dependent anaerobic methane oxidation microorganisms, which are very unique populations enabling the use of methane to reduce nitrite or nitrate. By integrating these nitrogen and methane cycling microorganisms, a novel membrane-supported biotechnology has been developed to remove nitrogen with dissolved methane as the electron donor. Dr. Guo is also an active researcher in the environmental dimension of antibiotic resistance, an area of increasing concern in urban water management. Dr. Guo and his team found that non-antibiotic pharmaceuticals and personal care products not only induce the emergence of multi-drug resistant bacteria via genetic mutation but also promote the spread of antibiotic resistance through horizontal gene transfer. These discoveries provide evidence that several pharmaceutical and personal care products that are used daily, are accelerating the spread of antibiotic resistance in clinically- and environmentally relevant settings. His research output and achievements have been recognized through national and international awards or fellowship, including 2013 Discovery Early Career Researcher Award (DECRA) and 2017 Australian Research Council Future Fellowship. He is an Associate-Editor for Water Research and Journal of Hazardous Materials.

The activated sludge process was invented in 1913-1914 by Mr. Edward Ardern, chemist at the Manchester-Davyhulme wastewater treatment plant, and his co-worker, Mr. William Lockett. Ardern and Lockett understood for the first time the active role of the suspension formed during the aeration of wastewater, known now as activated sludge. They introduced a recycle of this suspension formed during the aeration period. The award is named after Ardern and Lockett in recognition of the MEWE Specialist Group’s strong link to the activated sludge processes, and investigations into the microbial populations dynamics of these systems.

Here are the top 5 most read blogs of 2017. If you want to submit a blog for consideration in 2018, contact us. 1. Desalination – Past, Present and Future...
AfricaAsia-PacificIndustry
Roy Agterbos December 12, 2016

The IWA World Water Congress & Exhibition is a big and complex event that involves dozens of partners and two years of preparation. Every two years a new ci...
AgricultureEnvironmentIndustry
Marta Jimenez April 22, 2016

Resource Recovery, a Revolution for a Susta...

The power plant at Denmark’s Kalundborg Eco-Industrial Park uses surplus heat, in the form of steam, to heat 3.500 households; it has its own fish farm, from ...