IN MEMORIAM: Huw Taylor, a Water Microbiology icon, passes away 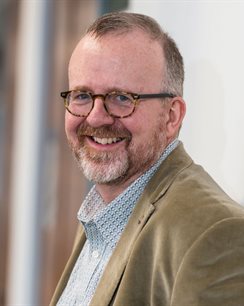 Huw Taylor, one of the most amiable and good-humored persons in our field of health-related water microbiology, has passed away on October 14. He was professor of Microbial Ecology at the University of Brighton, UK. A great mentor, that was very popular among his students.

His outstanding research has been instrumental to the development of Microbial Source Tracking as scientific method. He developed not only the science, but also translated this to ‘the field’: from mapping contamination sources in river and marine systems in the UK and Europe, to mapping and managing disease transmission in Indian megacities. He was dedicated to make his teaching and research help resolve waterborne diseases, especially in low income countries.

He worked to provide evidence-based water and sanitation solutions in Haïti, West Africa, Brazil, Malawi, Kenya, Nepal and India. He assisted the NGO Médecins Sans Frontières in Haïti during the cholera outbreak that followed the 2010 earthquake to design a safe treatment system for cholera hospital wastewaters. He coordinated an international WHO expert team to advise on the sanitation response in the Ebola outbreak in West Africa in 2014-2016. He developed novel-low cost approaches to disinfecting human waste in emergency settings and microbial source tracking methods.

He had an impact on the health of people in emergency and low income settings, and on the lives of his students and of many, many international colleagues. We will miss his sharp wit, his kindness and his humorous reflections on science and life.

To honour Huw Taylor’s legacy, the Board of the IWA Specialist Group Health-Related Water Microbiology has established the Huw Taylor Prize to promote exceptional scientific contributions to provide water or sanitation solutions in emergency and developing settings. Huw Taylor was the first to receive this Prize. The next Huw Taylor Prize will be awarded at the Watermicro 2019 conference in Vienna.

Floods and storms are responsible for almost three-quarters of climate disasters. Yet, all around the world, resilience to climate shocks does not get as much a...
Climate changeEnvironmentSolutions (expo)Uncategorized
Ron Askin July 18, 2018

Wastewater – a precious resource with t...

Solving the planet’s water challenges has never been more urgent. The global population is growing exponentially, while rapid agricultural and industrial deve...
DataDigitalisation
Oliver Grievson May 1, 2019

Importance of Data in the Digital Transform...