Nature-based Solutions: The advantage of being a developing country

What are Nature-based Solutions (NBS) and do we understand them?

There are multiple definitions of NBS but I will use the definition given by the International Union for Conservation of Nature (IUCN): NBS are defined as “actions to protect, sustainably manage, and restore natural or modified ecosystems, which address societal challenges effectively and adaptively, simultaneously providing human well-being and biodiversity benefits.” There are two types of NBS:

They have a wide range of benefits for people and the environment, including temperature regulation, elemental and chemical sinks/sequestration, recreation, increased tourism and general improved wellbeing. I would like to point out here that they all have differing efficiencies. However, they all play a role in creating a better environment within, and outside of, urban centres. In the water sector, NBS help with wastewater treatment, drinking water provision, water storage, coastal protection, groundwater recharge, transportation and leisure, and fisheries and agriculture.

Developing countries are at an advantage in the ‘race’ to 2030. Mainly due to the fact that they do not have extensive networks of infrastructure or institutions to rebuild like those in the developed world. For them, sustainable practices can be incorporated into their present and upcoming economic and overall growth. Shifting to investments in green energy, water reuse, resource recovery and nature conservation is more sustainably viable than trying to quickly reach developed status through the traditional, degrading industrial practices. Moreover, governments could include Nature-based Solutions (NBS) in the sustainable policies being created for their respective countries. 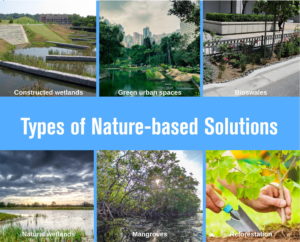 NBS – only a developing country tool?

With substantial buy-in to the Sustainable Development Goals (SDGs), innovative plans and programs have become more popular in which research plays an integral role. Furthermore, there is a bevy of information associated with NBS but its inclusion in implementation is lower than expected due to issues with the logistics of implementation. Thus, the International Water Association (IWA) and The Nature Conservancy (TNC) have partnered together to focus on highlighting a series of cases about NBS that can help belay the misconceptions surrounding their implementation. In order to do this, utilities and regulators that have expressed interest or have already begun to incorporate NBS in their water systems, were approached by IWA and TNC to get deeper insights about their operations and implementation. These cases will be published later on in September.

Two cases analysed in the publication are IWA members, from developing and developed countries, involved in the Nature for Water and Sanitation project that have discussed implementing or that have already implemented NBS:

National Water and Sanitation Council (NWASCO) (Lusaka, Zambia): Due to the self-supplying of water, private waste disposal mechanisms and improper solid waste management by Lusaka residents, there is depletion and contamination of the underlying aquifer occurring.  Along with cholera, other harmful illnesses can spread rapidly within the capital. In an effort to reduce the threat of drinking water contamination NWASCO has partnered with local stakeholders to discuss the implementation of a well-field and catchment management project. NWASCO is hopeful of success due to the location of the project sites which has promoted political buy-in, as well as highlighted the seriousness associated with doing nothing at all.

De Watergroep Utility (Flanders, Belgium): this utility has been investing in catchment protection initiatives to improve the quality of water available in surface and ground waters. These plans have already shown an improvement in the aquifers’ water quality, however, the surface water has been increasingly poor with the rise of unsustainable farming practices by landowners. To combat this, De Watergroep has proposed to increase collaboration with landowners and research institutes to create regulation and awareness about the impact of the above-mentioned practices.

Aerial view of the water basins at Kluizen near Ghent for the collection of surface water for drinking water supply. Photo: De Watergroep.

There are other great examples of NBS that have already been implemented in developing countries and have begun to show promising results:

The Mangroves and Markets project (Mekong Delta, Vietnam): this project couples the organic farming of black tiger shrimp and coastal protection from tidal erosion through the restoration of coastal mangrove forests. Mangroves provide a healthy habitat for the shrimp to grow as well as act as a carbon sink for atmospheric carbon and as a buffer between the coasts and storm surge. This project, so far, has improved the livelihoods of 2,000 households, has restored 80 hectares and protected 12, 600 hectares of mangrove forest, thus contributing to climate change adaptation and mitigation.

Fondo Agua Por La Vida y la Sostenibilidad (Cauca Valley, Colombia): this fund focuses on decreasing water shortages during the dry season, improving water quality, better livelihoods for rural households, and ensuring the protection of biodiversity through ecosystem protection, replanting, riparian restoration, and agricultural and animal husbandry best management practices. Local stakeholders have observed that through changed land use patterns the quality of the water has improved as well as produces more returns to provide for their families.

The implementation of NBS can be described as a multifaceted process that requires knowledge, evidence, understanding, willingness and patience from every stakeholder within each catchment or urban centre. With initiatives such as the one between IWA and TNC, local stakeholders and key players in the sector such as utilities on the implementation side and regulators and the public authorities can become more aware of the benefits attached to NBS ranging from improving water quality to improving livability to enhancing biodiversity.

At the 2015 United Nations Sustainable Development Summit in New York, all of the UN member states adopted the 2030 Agenda for Sustainable Development. Sustainable Development Goal (SDG) 6 aims at achieving clean water and sanitation for all by 2030, and this includes the protection and conservation of water-related ecosystems. Worsening natural disasters and burgeoning populations continue to pose a threat to countries and their citizens, but they have also inspired innovative solutions to protect citizens and improve resilience. For low to middle income countries, implementing low cost, multi-benefit solutions would be advantageous to cope with global changes and to achieve the 2030 Sustainable Development Agenda.

Strategic Programmes Officer
Erin completed her Masters in Water Management with a specialisation in Water Quality Management at the IHE Delft Institute for Water Education in The Netherlands. Prior to this, she graduated with Bachelors in Chemistry with a minor in Biochemistry ... Read full biography
Katharine Cross and Raul Glotzbach March 9, 2018

While attending a recent event, a representative of an international development agency argued that, if we had spent as much money on sanitation as we have on d...
Climate change
Katharine Cross October 12, 2017

The peak of hurricane season in the Atlantic Ocean has passed but the storms are not yet over. Hurricane Harvey broke rainfall records in the continental USA wi...
Climate changeEnvironment
Katharine Cross August 12, 2021

It’s time to put nature at the heart of w...

Nature often acts as a as a conduit for untreated sewage into water bodies, wetlands, or the sea. However, a planned approach using nature-based solutions (NBS)...
Digitalisation
Erin Jordan October 6, 2022

Future City Flow was implemented to visualize and communicate the effects of measures undertaken and to identify target values as part of a 10 years plan, and h...