In the area surrounding the Júcar and Moscas rivers as they pass through the city of Cuenca, there are a number of important services that are highly vulnerable to flooding, such as the Fire Station, the Civil Protection Service of Cuenca, the Fairgrounds, the Bosque de Acero pavilion, the Recoletas de Cuenca Hospital and the Alameda geriatric residence.

The collaboration between the Cuenca City Council and the Júcar River Basin Authority has allowed the execution of works to reduce the risk of flooding in the area and to contribute to the environmental improvement of the surroundings. 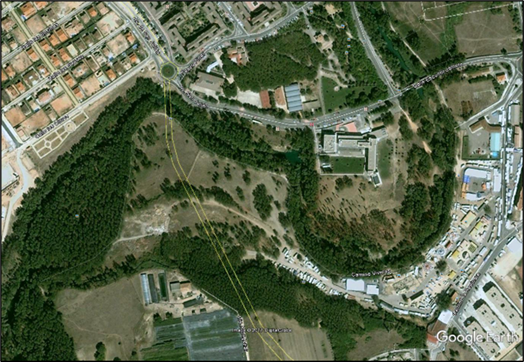 Throughout history, the area around the Júcar and Moscas rivers has been linked to the development of the city of Cuenca. The area of focus is known as La Alameda (which  means grove of trees) and is located on the outskirts of the town and has been used for various activities: cultivation of orchards, old resin plantations or poplar tree plantations that stabilised banks and beaches that were exposed to regular floods. Once the orchards were abandoned, several areas of the plot were used as uncontrolled waste dumps.

Currently, the land formerly occupied by plantations and orchards is used for other purposes. On the left bank is the Cuenca Fire Station and the Civil Protection Centre, as well as the fairgrounds and the Bosque de Acero (Steel Forest) pavilion. On the opposite bank to the fairgrounds and immediately downstream from the San Julián bridge are located the Recoletas de Cuenca Hospital and Clinic and the Alameda geriatric home. All these facilities are highly vulnerable to flooding.

The fluvial dynamics of the river section during flooding has been highly affected by the construction of the N-400 road, Ronda Oeste, crossing the river valley from south to north, downstream from the hospital (two masonry structures bridging the river beds of the Júcar and Moscas and two semi-circular 9-metre diameter crossing structures under the embankment for pedestrian crossing).

The whole area falls within an Area of Significant Potential Risk (ARPSI): ARPSI 0018-Rivers Júcar and Moscas, according to the Flood Risk Management Plan of the Júcar Hydrographic Demarcation, approved by Royal Decree 18/2016, of 15 January. According to the National Flood Zones Mapping System (SNCZI), the ARPSI has an extensive area of probable flooding, with a large part of the confluence of both rivers being affected by the 10-year return period, with considerable damage caused by the overflow of water both on the right (hospital area) and left banks.

How is it impacting different stakeholders (especially urban)? Consider the Drivers for Action in the Action Agenda for Basin Connected Cities.

The European Floods Directive encourages the development of strategies aimed at reducing flood risk by avoiding the occupation of flood plains. One of the measures for this is through the recovery of the dimensions of river space.

Based on this, the Directorate General for Water of the Ministry of Ecological Transition and the Demographic Challenge, in collaboration with the Júcar River Basin Authority, developed the “Project to reduce the risk of flooding and improve the ecological state of the Júcar and Moscas rivers on their way through the basin.” The City Council of the city of Cuenca also collaborated with the project, as part of the affected land was municipally owned. The collaboration involving multiple administrative levels (national, basin, and city scales) started in 2018 and the aforementioned project is expected to be completed in 2022. After the completion of construction works, the Cuenca City Council will be responsible for the maintenance of the structures. The project implementation area is presented in Figure 2. 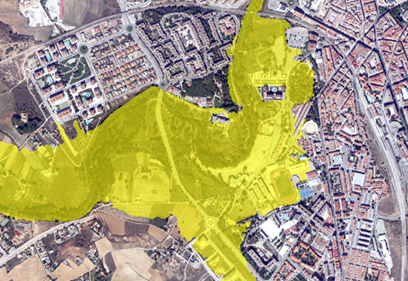 Figure 2. Scope of action with indication of Flood Zone for Tr 500 years.

Considering the current problems affecting the area and the different environmental, flooding, and socio-economic factors linked to the area urban characteristics, the main objectives to be achieved by this project are:

To achieve these objectives, different actions are being taken.

The right bank of the River Júcar will be naturalised by clearing the existing levee and consolidating and improving a stable protection line to protect the hospital facilities.

For its construction, the earth removed from the levee is spread, together with the necessary material, which is compensated with the material from the levee on the left bank, as shown in Figure 3.

Figure 3. Section type removal of levee on the edge of the hospital.

Removal of the left bank levee

This action removes the levee that forms part of the left bank of the riverbed, from the fairgrounds to the bridge of the western ring road, while the existing levee on the right bank, immediately downstream of the bridge, is set back.

Removal of debris and waste

In the area of action, mainly downstream of the N-400 road, undetermined quantities of construction and demolition waste have been dumped. The action consists of excavation, loading and removal of the waste to an authorised waste management plant.

In order to increase the flood lamination capacity of the zone, the channels will be cleared and excavated, in the form of mouthpieces, towards the two crossings under the road.

A breakwater protection is being built on the embankment of the N-400 road (west ring road), to provide greater stability to the slope and prevent the washout of fine sediment during periods of flooding (as shown in Figure 4).

Improvement of the hydraulic section

This action consists of enlarging the hydraulic section of the Júcar River downstream of the confluence with the Moscas River, aiming at improving the river’s hydraulic capacity in an area that conditions the depth upstream.

Forestry treatments and revegetation of the area

Selective thinning of existing vegetation and planting will be carried out, limited to areas where 1) it is necessary to control the establishment of other species; and 2) debris is removed and clearing and excavations are carried out, in order to recover the fluvial mobility space of the riverbed, after preparing the land by means of surface grading.

Enabling and endowment for public use

Footpaths and pedestrian paths connected to the existing Júcar River promenade on the left bank and to the area of the fairgrounds will be built, which will run along the river plain to the Alameda area and the confluence with the Moscas River.

On the paths and roads leading to the Alameda there are several benches along the route and other leisure facilities compatible with the flooding of the area.

The action described above aims at recovering the natural flood plains of the Júcar and Moscas rivers at their confluence. At the same time, it builds protections, by means of levees, to the existing buildings that due to their singularity and general interest, should be protected (hospital and geriatric clinic), thus combining the natural environmental values of the enclave, recovering the native vegetation, and integrating it all into the social use of a peri-urban area in a World Heritage city such as Cuenca. 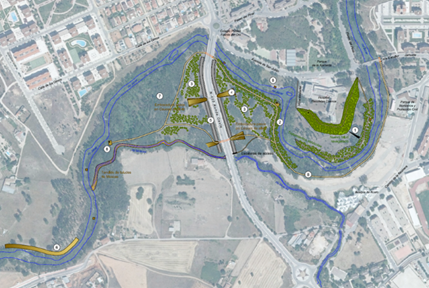 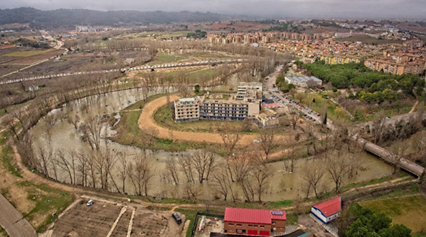 How is it impacting different stakeholders (especially urban)? Consider the Pathway(s) for Action in the Action Agenda for Basin Connected Cities.

In December 2019 there was a flood in the Júcar and Moscas rivers and the works carried out proved to be effective in controlling the flooding of the area without affecting the existing buildings (as shown in Figure 7).

The restoration of natural river floodplains is a nature-based solution that proved to be highly effective in mitigating the risk of flooding in urban environments, while at the same time enabling the recovery of the riverside forest and the enhancement of the river environment by citizens.

The Júcar River Basin Authority (or “Confederación Hidrográfica del Júcar”) is a Spanish River Basin Organisation. It is an entity with its own law jurisdiction, affiliated with administrative effects to the Spanish Ministry of Ecological Transition, and has full functional autonomy, according to what is established by Spanish water laws. The Public Water Administration is exercised for the intercommunity river basins by the River Basin Authorities, and within the intra-community river basins by the corresponding Autonomous Hydraulic Community Administrations (regional government of a group of provinces)  (article 16, Water Act).

Develop other functions derived from agreements with autonomous communities, local corporations, and other private or public entities.