The urbanisation trend is an undeniable fact worldwide in large and small cities all over the globe.

Water supply and sanitation are two of the most fundamental pillars for the sustainability of city inhabitants. Many cities in Central Asia are facing the same urbanisation trend situation by exerting high pressure on water supply and wastewater services (WWS).

In the case of Kazakhstan, water supply and wastewater services (WWS) systems also currently face major challenges on the continuous and uninterrupted provision of services. Rapid urbanisation, aged infrastructure, water scarcity, and poor water quality are some of the challenges to be currently addressed.

Furthermore, Kazakhstan, with a total area of just over 2.72 million km2 and nearly 18m population, is the 9th largest country in the world where remote settlements are frequent. Kazakhstan also has a highly continental climate with extreme weather conditions in northern parts while transboundary rivers provide nearly 60% of water intake in the country. The remoteness of cities, the experienced weather extremes and the dependence on water supply coming from other countries, bring some additional difficulties on the operation of WWS in the country.

According to the International Benchmarking Network for Water and Sanitation Utilities (IBNET) the coverage of drinking water supply in Kazakhstan reached 90% in the early 2000’s dropped in the last decade but has showed however an upward trend in the last 3-4 years. The situation is less satisfactory in wastewater services where the coverage seems to be just over 60% for the last decade as presented in Fig.1. 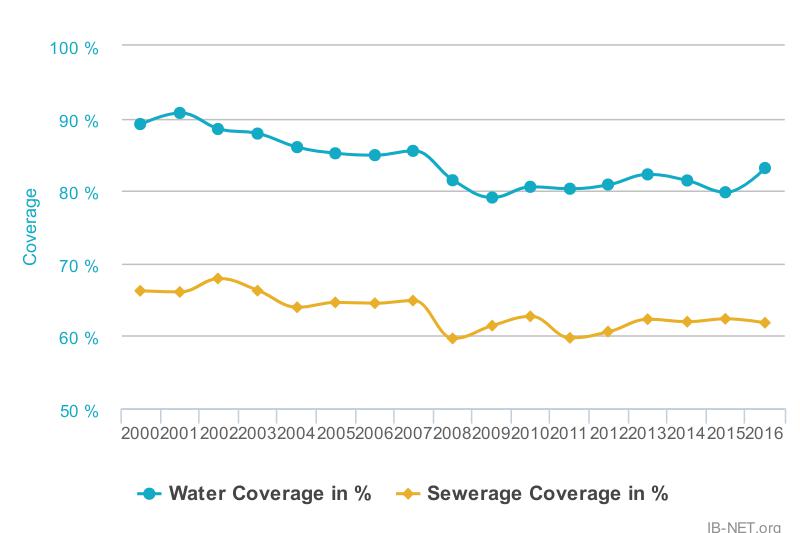 Water and Sewerage Coverage in Kazakhstan for the period 2000-2016

In this regard, we believe that urban water management requires an exhaustive economic analysis, in cities like Kazakhstan, where people’s demands are growing so fast there is no time to plan them carefully.  For this reason, the Graduate School of Public Policy (GSPP) of Nazarbayev University located in Nur-Sultan (previously named Astana), the capital city of Kazakhstan, asked the expertise of the Specialist Group (SG) on Statistics and Economics of the International Water Association (IWA) on urban water management issues with the main focus on economic aspects. We think that the organisation of workshops and meetings that involve people from several countries with similar or even different experiences in water management is very helpful, since we can all learn from their expertise.

From our point of view, the event was a great success not only because more than 100 participants with keen interest to learn from IWA experts on WWS issues worldwide attended the event, but also due to the interesting debates generated regarding water regulation and water management policies abroad in order to obtain an efficient system. In conclusion, our point is that we need to learn what has been done before and then establish a criterion for an efficient water management plan adapted to the social and institutional characteristics of the country.

Lledo Castellet – Researcher at the University of Valencia, Spain, since 2015. She has a degree on Environmental Science and a master´s degree on Water Resources Management. She has collaborated in different European and national projects re... Read full biography
Asia-PacificSocietyUrbanisation
Declan Hearne August 14, 2017

Starting a governance reform process? ‘Governance reform’ is a catch phrase that is often used by water leaders as a panacea to fix the many ills afflicting...
Asia-PacificSanitationSDGs
Sanjay Banka March 10, 2022

Onsite and Decentralised Systems: A Sanitat...

Faecal sludge management in rural India – Case from Dhenkanal, Odisha India has made tremendous gain in eliminating opening defecation in the last five ye...
Sorry ! This author has no more posts.