What happens if we put nature and people first?

Last month Copenhagen was the host of the C40 Mayors summit. Here more than 1000 mayors, city planners etc. from the world’s most ambitious green cities met to discuss how to tackle climate change. It was my experience that urban water management and climate adaptation in particular was an increasing concern for a lot of the cities. At the City of Copenhagen, we look forward to continuing the discussions during the IWA World Water Congress & Exhibition in October next year because we have seen first-hand what a difference it makes, when you combine the need for storm water solutions with urban development.

Very often when we talk about storm water projects, we have the image of huge technical solutions in mind. Huge underground retention basins, large underground pipes removing the storm water (very often mixed with black sewage water) have in many cities been the solutions to combat the increased amounts of rain that climate change will and is bringing to cities.

In Copenhagen we have chosen a different approach. Our citywide cloudburst management plan has been developed with a majority of the projects being surface solutions, basically creating a new infrastructure for retention and transport of storm water. It is cheaper than the traditional solutions, and it also gives us the opportunity to create multifunctional solutions that will improve the city by adding more green areas, more nature and more multifunctional space to be used when it is not raining. And the projects that we have implemented so far demonstrate this quite clearly as illustrated in these examples:

Tåsinge Square – transformation of a neighbourhood

This was the first project that was finished. It is located in the Northeastern part of Copenhagen in the so-called Climate Neighbourhood. This neighbourhood was selected to demonstrate the cloudburst projects in the city also as part of a neighbourhood regeneration project. Tåsinge Square was a little green triangle surrounded by roads with parking. There was no social life, no cafés and the square was basically only used for walking dogs. 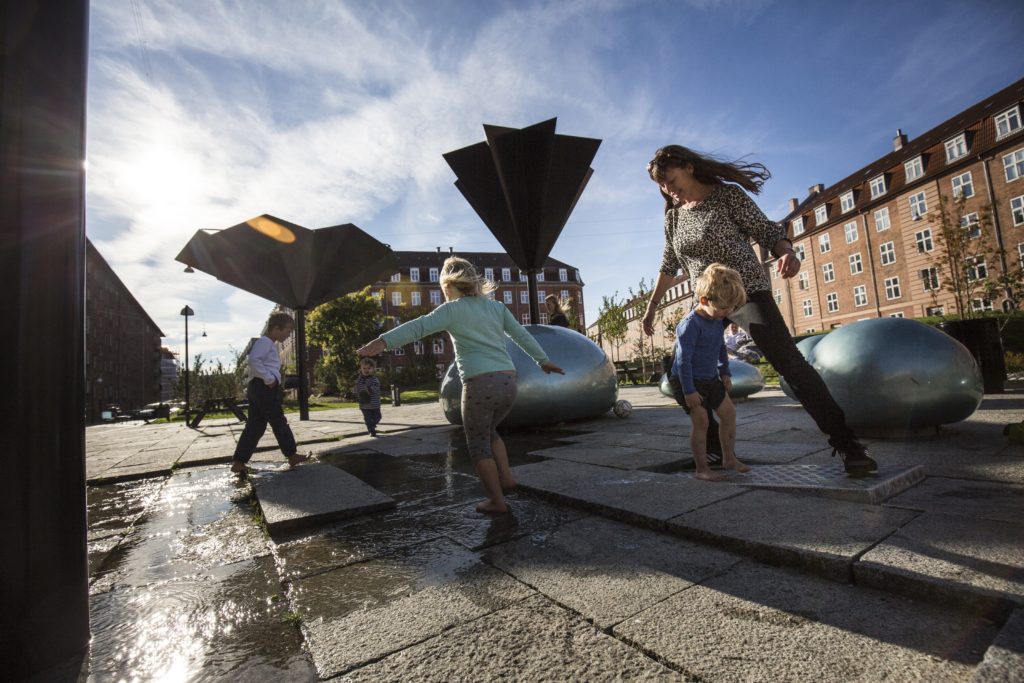 The project was designed in close collaboration with the local community. Their focus was mainly on how you could transform the square into a small green park with more room for social activities. So the design of the project was not only focused on how to transform the square into a retention area, but also on how to actually create space for the local community.

The solution was a division of the new park into a retention area receiving storm water from surrounding buildings and roads, and a little paved square and a lot of green surrounding it. Closing of one of the streets also gave more space and a clear connection between the buildings and the new park. 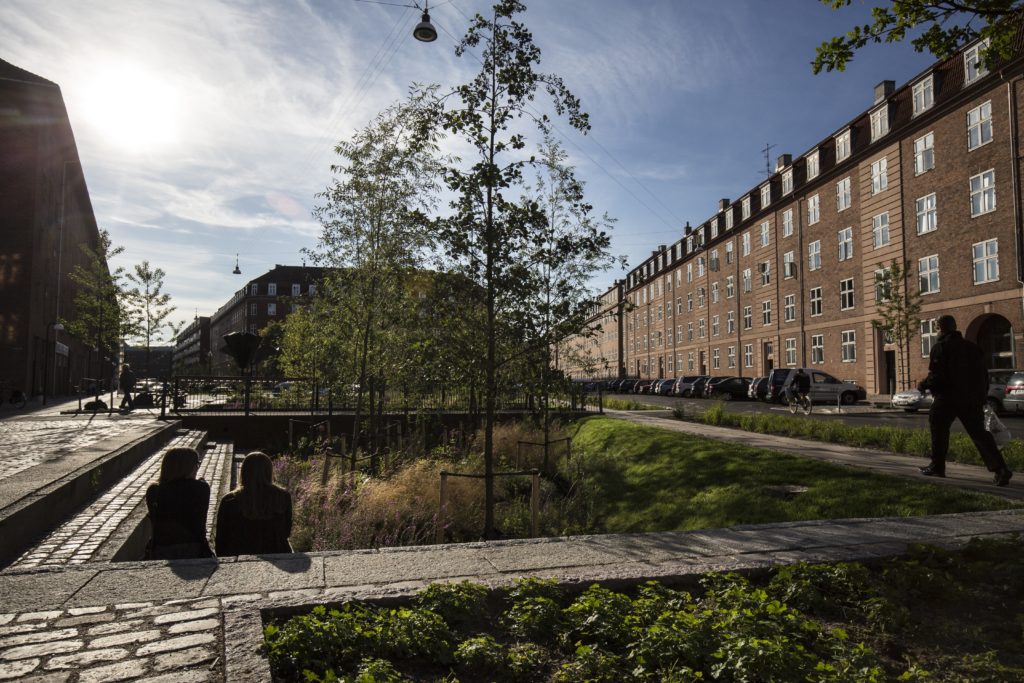 And the result was amazing. Of course, the storm water retention works – it has been tried and tested in a number of events since the opening of the park in 2014. But more importantly, the design of the park and square has become a new meeting place for the local community. On sunny days people are filling the square, drinking coffee from one of the two new cafés and just enjoying the place. It is used for flea-markets, Christmas markets and other social events in the neighbourhood.

In the southern part of Copenhagen we find Scandiagade. It is located in one of the poorer neighbourhoods in Copenhagen – between the new harbour developments and social housing estates. The street was cut off some time in the 1970’s as part of removing traffic going through the neighbourhood and since then the street has been a dead-end – with nice trees, but nothing else. It was not a place to go walk at night, as it was dark and isolated.

But the city needed the area for retention of storm water from the surrounding streets. And the local residents in the social housing estates needed a safe, inviting green space with room for activities. After a long process of working with the local residents the design ended up as eight sunken gardens that serve a dual purpose. When it is dry, it allows the residents to grow vegetables, explore different kinds of biotopes representing some of the nature in the neighbourhood or just hang out. And when heavy rain hits the neighbourhood, the gardens collect storm water from the street.

And the result is amazing – it has really transformed the street and the life on the street. Before you would rarely meet anybody there. Now there are always people there, and from being a dead-end it is now a center for activities.

Climate change really challenges cities with for example huge amounts of rain. But with clever design and a focus on local communities, social life and biodiversity it can also help transform our cities to green liveable places with room for water and for people and nature. And the best part is that it is cheaper than digging big holes in the ground. And the solutions from Copenhagen can easily be applied in other cities. Currently New York City is working on their own version of the Climate Neighbourhood. What’s not to like?

Program director for Resilient and Sustainable City Solutions
Ms. Lykke Leonardsen has worked with urban development for the past 25 years in Copenhagen. This includes local regeneration projects, international urban policies and communication. Since 2008 she has worked for the Technical and Environmental Admi... Read full biography
SDGs
Carolina Latorre and Louisa Gosling March 20, 2019

Local leadership to leave no-one behind

The 2019 World Water Day is focusing on the huge challenge – to leave no-one-behind. This year’s World Water Day focus is one of the most significant sh...
EnvironmentHealthSDGs
Manikanda Bharath K July 22, 2021

Are face masks a threat to oceans?

The invisible connection between groundwate...

As we mark this year’s World Toilet Day, it is imperative to recognise the interdependency of the targets under SDG 6 from a holistic point of view, and most ...
Sorry ! This author has no more posts.