Can you imagine a world in which antibiotics no longer work?

Almost a century after Alexander Fleming’s discovery of penicillin in 1928, the era of life-saving, life-enhancing antibiotics may be coming to an end. Antibiotics, able to effectively treat bacterial infections in humans, animals and plants, have enabled some of the greatest advances in modern medicine. Now, however, the emergence of resistant bacterial strains is accelerating, rapidly depleting our arsenal of antibiotics – and with few if any new antibiotics in the pipeline.

It was Fleming himself who sounded a note of warning, already in 1945, when he said in his Nobel Prize lecture, “There is the danger that the ignorant man may easily under-dose himself and by exposing his microbes to non-lethal quantities of the drug, make them resistant.”

Rise of the ‘superbugs’

Now documented in every corner of the world, antibiotic resistance is taking an increasing toll. Multi-drug resistant infections are responsible for at least 700,000 deaths every year, a number estimated to increase to an alarming 10 million by 2050[3]. So what has increased antibiotic resistance?

In some countries, antibiotics are available as over-the-counter drugs without medical supervision. In others, over-prescription for viral infections like the flu or common cold, which antibiotics cannot treat, has contributed to resistance developing. In informal settings, substandard or fake drugs can induce resistance without curing the infection they are supposed to address. A failure to complete the full antibiotic treatment further exacerbates the situation. Our misuse of antibiotics has allowed bacteria to outsmart us – and at an unexpectedly fast pace.

The increased use of antibiotics in livestock and fisheries is also important. This has introduced animal antibiotics into the human food chain, increasing antibiotic resistance and creating an environmental problem. Resistant bacteria in animal waste end up in the (aquatic) environment, where resistant genes can be swapped between micro-organisms. Resistance in harmless bacteria can inadvertently end up in pathogenic ones. 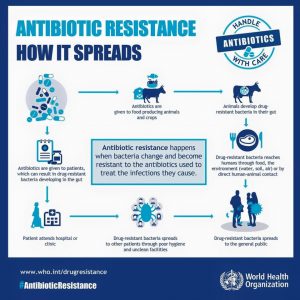 The economics don’t help. Between the 1940s and 1960s, twenty new classes of antibiotics were discovered; since then, only two new classes have reached the market. The incentives for pharmaceutical companies to take up the challenge simply aren’t there. Considering that there are now bacteria that are resistant to all known antibiotics, how can we effectively curb the rise of these ‘superbugs’?

Hospitals and health care centres, as hotbeds of microbial infections, are an obvious place to start spotting antibiotic resistance. But while medical practitioners struggle to devise new ways of treating drug-resistance, and scientists try to reinvigorate investment in research and public awareness campaigns, some microbiologists are turning to the water sector for answers.

The water sector: picking up the fight against antibiotic resistance

“There are many battle fronts to fighting antibiotic resistance. One that is increasingly been considered is the water cycle”, said Amy Pruden, an Environmental Microbiology expert who will be speaking at the IWA Leading Edge Technology Conference this year.

Apart from emerging concerns associated with pharmaceutical pollution of the waterways and its impact on aquatic life and ecosystems, the presence of antibiotics in the environment can ‘incubate’ antibiotic resistant bacteria and genes, which then get into human water and food supplies.

These bugs are of a different nature to the pathogens for which water treatment systems have been constructed. They have the capacity to exchange DNA with each other, transferring their resistance genes. We need to better understand the behaviour of resistant bacteria in wastewater, and if wastewater treatment plants provide an environment that is conducive to this DNA transfer. If so how can we manage that?

Pruden argues for a “new risk assessment framework”, and advances in decoding the DNA of wastewater could soon make this possible. DNA analyses – an “early warning system for pathogens” – may help detect antibiotic resistance strains. “As we invest in new infrastructure to reduce and reuse water, we need to think of the fate of the DNA through membrane treatment, disinfection, and advanced oxidation processes, all the way to the point of use”, says Pruden.

Can water professionals instigate a public health revolution combatting antibiotic resistance? Professor Pedro Alvarez of Rice University thinks so: “Part of the solution will be technology but there are far-reaching solutions of a non-technical nature, such as policies to minimise use and misuse of antibiotics or incentives to rotate antibiotics to keep the bacteria off-guard. As water professionals, we can provide scientific input to develop these intelligent policies.”

Detection and Control of Emerging Contaminants and Antibiotic Resistance will be a key theme at the 15th IWA Leading Edge Conference on Water and Wastewater Technologies, 27-31 May 2018, Nanjing, China

[1] Microbial DNA found in the gut of Incan mummies by a research team from the California Polytechnic State University in San Louis Opisbo: https://www.newscientist.com/article/2096495-antibiotic-resistance-discovered-in-the-guts-of-ancient-mummies/

[2] From the 1940s through the 1980s, average time to the emergence of antibiotic resistance in select bacteria exceeded 10 years (excluding penicillin). The average time to resistance is now approximately one year. For more information: http://www.cdc.gov/drugresistance/pdf/ar-threats-2013-508.pdf

The journey of our water from source to tap is long, and not one we think much about. For most of us, our water starts high in the mountains, hundreds of miles ...
AgricultureClimate changeEnvironmentUrbanisation
Corinne Trommsdorff Lisa Andrews and Aparna Sridhar June 27, 2017

Answering the call of the wild on World Env...

“…even if all the other building blocks of effective conservation are in place, we will not succeed unless the general public cares, and they are unlikely t...
IndustryTechnology
Marta Jimenez March 27, 2019

Thanks to our bloggers and readers, the IWA blog has become a reference for those with a thirst for communicating and learning about water, and for those wantin...
AgricultureClimate changeHealth
Marta Jimenez September 17, 2018

The UN reports that the world is currently not on track to meet Sustainable Development Goal 6 by 2030. What’s your assessment? The challenge with SDG 6 is th...