Windhoek, Namibia’s capital in the dry and hot central highland, has water demand which outstrips both conventional (rivers and dams, groundwater) and unconventional (desalination, managed groundwater recharge, water reclamation) water resources. An economically viable mix of all conventional and unconventional resources must be established to sustain the City’s development, including inter-basin transfer of fresh water from the bordering perennial rivers or desalinated seawater. But as these additional supply options are costly, there needs to be active water user involvement in reducing water consumption and losses as well as setting incentives to develop water intense industries in areas with better water supply. As the population of Windhoek continues to grow and the incidence of droughts becomes more frequent, ensuring water security will involve numerous measures and stakeholders to plan and prepare for future water crises in the arid city. 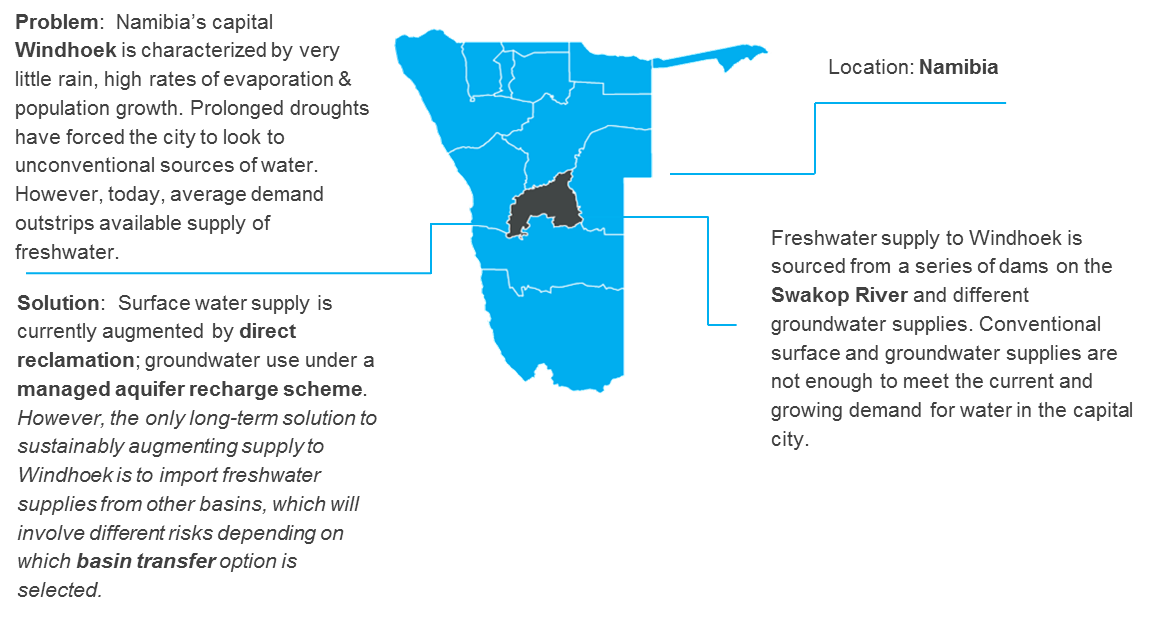 Windhoek is the capital and largest city of the Republic of Namibia. It is located in central Namibia in the Khomas Highland plateau area, at around 1,700 metres above sea level, almost exactly at the country’s geographical centre. The population of Windhoek in 2011 was 325,858, growing continually at a rate of 3.1% per annum due to an influx from all over Namibia.

The original town was established at the site of permanent springs known to the indigenous pastoral communities and was made capital of the then colonized territory in 1890 by Imperial Germany. Today Windhoek is the social, economic, political, and cultural centre of the country.

The Central Region of Namibia is characterized by low average precipitation of 250 to 400 mm/year, high potential evaporation of up to 3000 mm/year and no natural perennial surface water bodies. Thus, increasing water shortage for the growing city became a reality already in the middle of last century. During prolonged droughts, the city on a number of occasions faced a complete breakdown of fresh water supply which could only be narrowly avoided through the establishment of certain innovative counter measures, such as Direct Potable Reuse (DPR). Today, even the average demand outstrips available supply from the current conventional and unconventional water resources.

In addition, the impact of climate change is expected to negatively affect the current supply sources which are heavily dependent on and subject to climatic conditions i.e. rainfall and evaporation.

The extremely harsh environmental conditions and lack of sustainable, conventional surface or underground sources forced the city forefathers to consider rather unusual supply methods as early as the early 1960’s. Most of the water supply since 1970 until today ( +/- 70%) comes from the Sartorius van Bach Dam, retaining water from the intermittent Swakop River. This source is augmented by the Swakopport Dam, lower down in the Swakop River and the Omatako Dam, which itself is augmented by groundwater from the Tsumeb Karst Basin further north. As surface water in arid and semi-arid regions like Namibia is exposed to the high evaporation potential, it is unreliable at best and highly susceptible to failure in times of drought. As one of the alternative resources, the direct reclamation of waste water was introduced as early as 1968, making the Windhoek Goreangab Reclamation plant the first of its kind worldwide. With the new plant commissioned in 2002, direct potable reclamation makes up 25% of today’s potable supply to the capital city. Currently, efforts are directed towards establishing a second reclamation facility, eventually aimed at doubling the current capacity. Figure 1 shows the water supply scheme for the central area of Namibia. 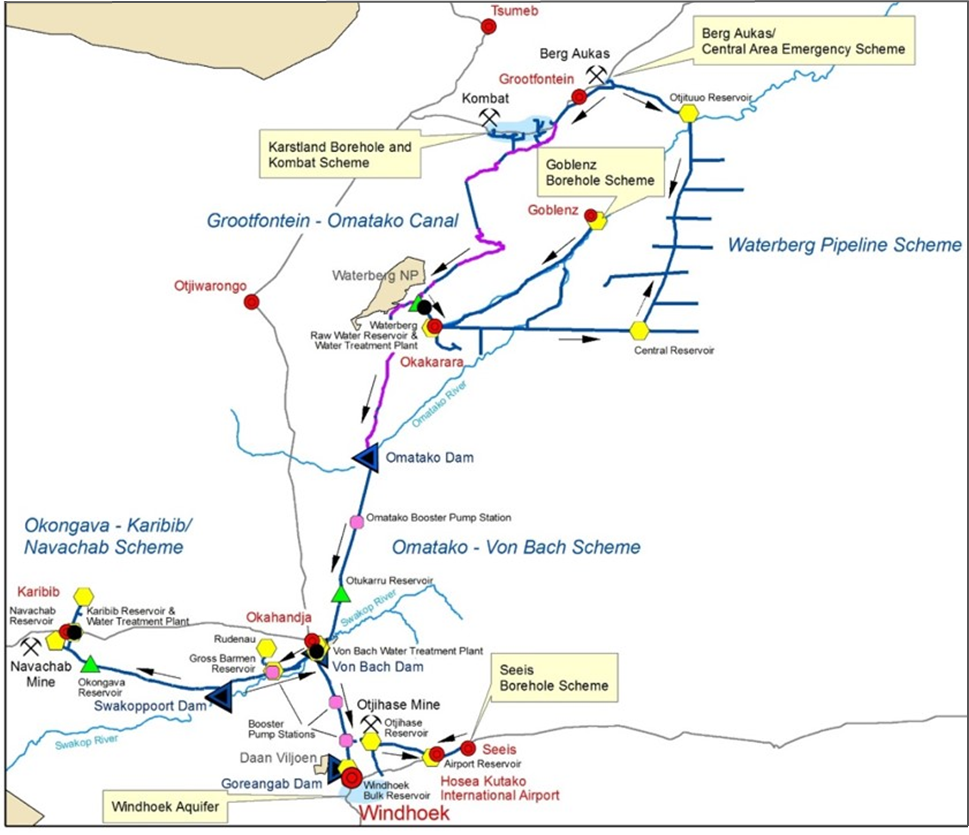 Groundwater through tapping of natural springs was the primary source of supply since early days. In fact, until the 1950’s, groundwater remained the primary source of the supply for the flourishing population. However, since 2006 deep boreholes have been established in the Windhoek Aquifer with the aim to increase sustainable abstraction from this source.

While the amount of usable stored volume is estimated to be up to 100 million m³, the annual average recharge is in the range of only 1.5 to 2 million m³. For this reason, current groundwater supplies can only augment 4-5% of the city’s demand on a sustainable basis. In order to improve the aquifer as a “water bank”, first steps have been taken towards a managed aquifer recharge (MAR) scheme (see Figure 2 for overview of Windhoek’s MAR scheme). As the annual precipitation is highly variable both over the seasons and over different years, huge amounts of fresh water are lost through surface run off or evaporation. Storing excess water during times of high rainfalls underground where losses are minimal will improve the city’s resilience against droughts tremendously. In years of drought, for instance in 2016, the Windhoek Aquifer proved to be a back-up lifeline supplying almost 2/3’s of potable supply and helped to save the city from an imminent supply break down. As climate extremes increasingly escalate, MAR is considered one of the best options for adaptation to the predicted impacts of climate change. 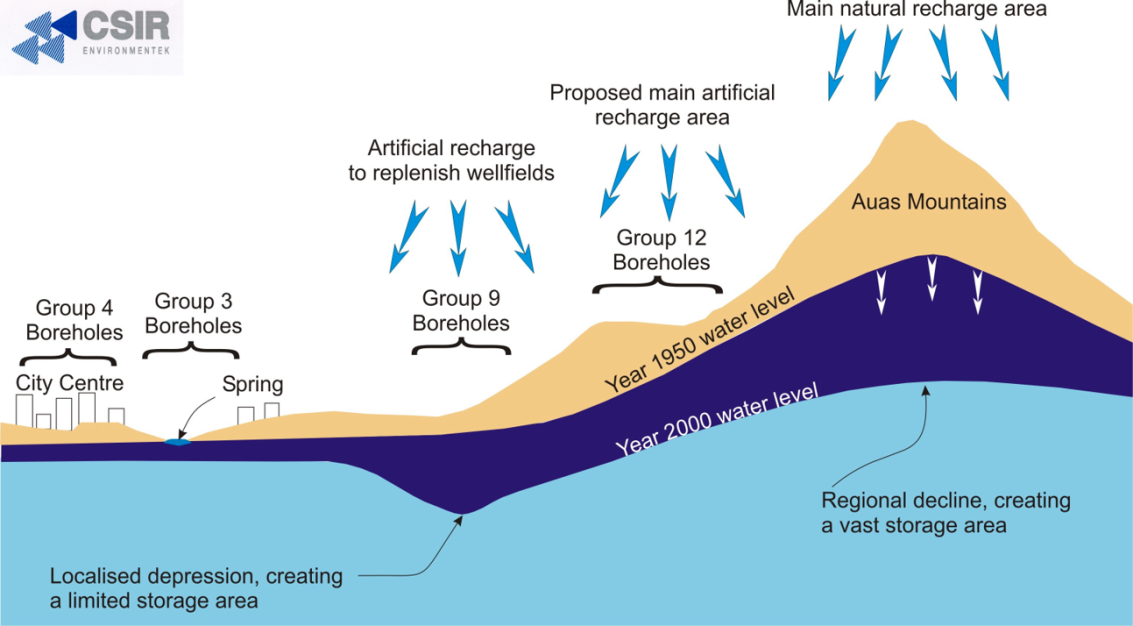 But even with all auxiliary measures fully implemented as mentioned above, the rising future demand brought on by development is going to outpace supply potential in the years to come. The only viable long-term solution for sustaining further water supply and development in Windhoek is to import fresh water from other basins. In this regard, two options have been identified for in depth feasibility studies: 1. Abstracting water from the Okavango River, approximately 700km North of Windhoek and 2. Bringing in desalinated seawater from the Atlantic coast at Swakopmund, about 350km away. Both options involve huge capital investments and operational costs. While the operational cost of the first solution is likely to be considerably lower due to the far smaller elevation gap (about 700m compared to 1700m of the ‘Atlantic coast’ solution) and  lower treatment requirements. However, the risk remains that during times of extreme droughts, the Okavango might fail as a resource. This risk is intensified by two factors: (1) the upstream neighbour Angola is pushing agricultural development in the relatively unused area around the rivers headwaters, decreasing the amount of water flowing towards the downstream riparian states; (2) a reduced flow into the world heritage site of the Okavango delta might negatively affect this precious eco-system, which could bear the risk of a potential conflict with Botswana.

Taking water from the virtually infinite Atlantic Ocean would be the most reliable alternative. But even using renewable energy sources such as wind and solar to desalinate and transport the water, the production costs compared to the current supply options might be prohibitively high.

Against the aforementioned background, it is obvious that the import of water from other basins must be kept to a minimum in order to keep water affordable. To achieve this, all locally available water resources must be used as efficiently and optimally as possible. During the last drought in 2016, when the city was at the brink of a supply breakdown, the Government in cooperation with the City administration and the bulk water supplier NamWater introduced a massive awareness campaign for users to save water. For a large part of the declared drought period, a reduction of up to 35% compared to previous average consumption was achieved. This has highlighted the need for a permanent demand reduction to a level considered suitable to the arid environment and shortage in supply. Permanent Water Demand Measures were introduced to carefully manage and match demand to available supply. For the future, further measures to reduce physical losses are planned and an update of the tariff system is in the making to secure water supply at affordable rates, including in poor and informal areas of the city.

The unconventional approaches of direct reclamation and managed groundwater recharge saved Windhoek from an almost certain breakdown in water supply on several occasions. The close interaction with the users, which are actively involved in a Basin Management Committee, led to successful water saving campaigns in times of immanent crisis. This greatly assisted the Namibian Government in its commitment to the Sustainable Development Goals (SDGs), especially in fair and equitable access to water resources, and is reflected in excellent supply coverage of 99% in urban areas considering the difficult natural conditions.

But it seems also clear that unhindered growth of Windhoek will inevitably lead to a high increase in supply costs. With this, the coverage especially of the urban poor will be challenged. Incentives to develop other parts of Namibia, where water supply is less challenging, are desirable. Decentralisation, especially of water intense industries is key for the economic benefit of the country as a whole.

The City of Windhoek; NamWater (bulk water supplier), Ministry of Agriculture, Water & Forestry; German Cooperation form the formal backbone of water resources management for Windhoek. Securing water for Windhoek has benefits for all water users, including users from the private and industrial sectors.

Through the many years of operating direct potable reclamation, the City of Windhoek has established certain principles, which today are regarded as the key foundation to the operation of such a scheme. Much of this has been incorporated globally in similar attempts at diversifying supply from unconventional resources. These fundamental principles are as follows:

It is also worth noting that in depth hydrogeological and hydraulic investigations of the basin were the foundation for the development of the Windhoek Managed Aquifer Recharge Scheme (WMARS), which acts as a “water bank” for the City in times of drought. 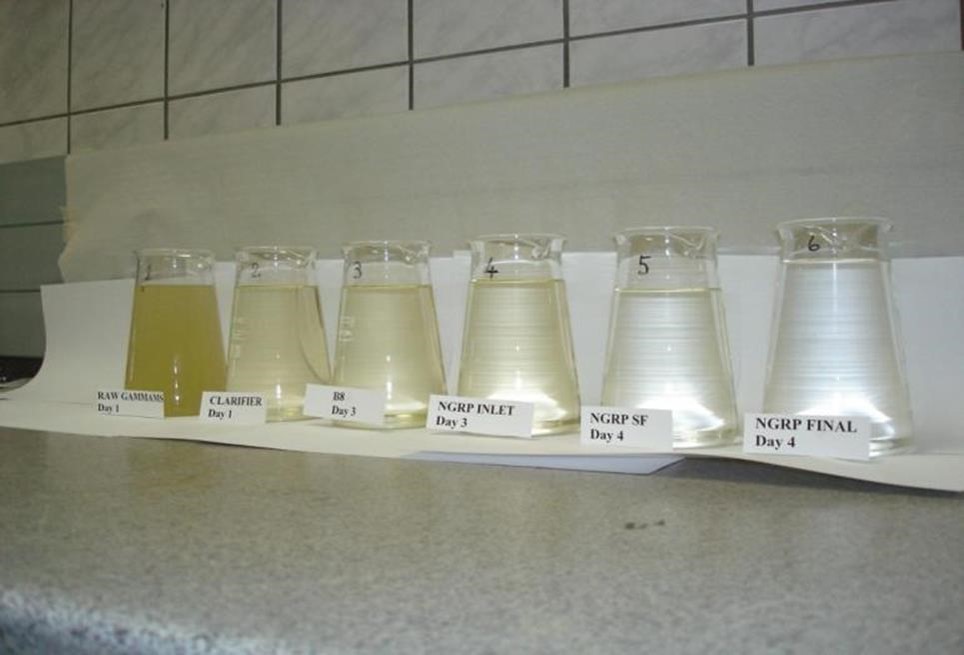 Given the extensive and long standing local knowledge, the implementation of DPR on a larger scale in other basins in Namibia and elsewhere can be considered a viable alternative water source, provided that the institutional framework can support this. Globally, the standardization of methods and improvement in technology and monitoring practices has come a long way especially with the launch of the WHO Guidelines on DPR in July 2017. However, the formidable barrier of public perception in relation to this practice still needs to be overcome, despite working examples such as Windhoek. Monitoring and further research on emerging concerns of water reuse like micro-pollutants will help to overcome negative public perception of DPR.

To establish MAR scheme, a sound understanding of the environmental conditions such as climate, hydrology and geology is a prerequisite. Any planning without this essential information might lead to a loss of investments.