On the initiative Berlin’s water utility Berliner Wasserbetriebe and the Berlin Center of Competence for Water (KWB), the City of Berlin has now endorsed the IWA principles on Water-wise Cities.

At the opening ceremony of the International Water Reuse Conference 2019 recently held in Berlin, Stefan Tidow, Permanent Secretary of the Berlin Senate Department for the Environment, Transport and Climate Protection, and Jörg Simon, Chairman of the Board of Berliner Wasserbetriebe, have a signed the corresponding document in the presence of IWA Executive Director Prof. Kalanithy Vairavamoorthy. 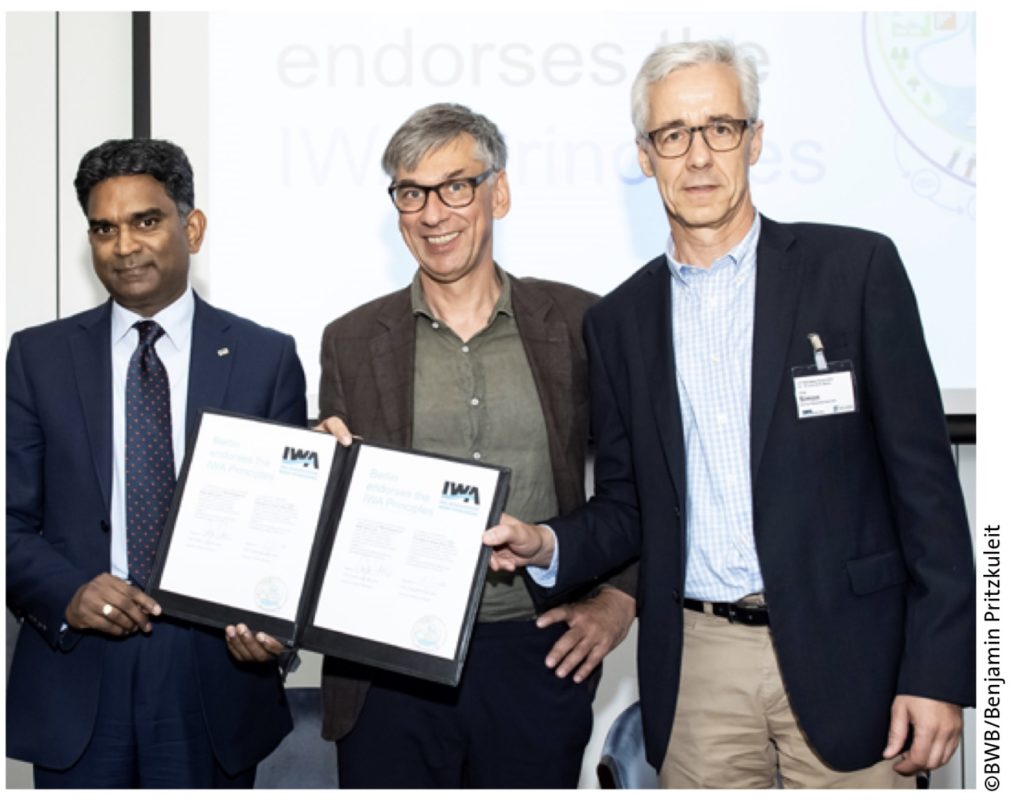 The IWA’s Principles for Water-Wise Cities with its 17 management rules aim to support large cities when it comes to designing their water management systems to more effec- tively deal with the changes presented by climate change and demographic development.

To date, prominent cities such as Amsterdam, Brisbane and Copenhagen, among others, have made the decision to apply these management rules, which have been developed by international experts in water management.

In his interview with Dr. Bodo Weigert, Stefan Tidow mentioned that even though Berlin is on the right path to sustainably managing its water resources, there is still much that needs to be done.

“Yes, Berlin is on the right path. However, we are also aware that we still have a long road ahead of us when it comes to achieving our goals. In the environmental department, we have been taking a comprehensive approach to the subject of climate change and its effects on the water cycle for many years now.

Unlike other cities, which use long-distance pipelines to transport water into the city from the surrounding region, Berlin supplies itself with its own drinking water from within the city area. In addition to the many benefits which this offers, this also means that the system bears a great deal of responsibility when it comes to ensuring its future and guaranteeing sustainable operation. This is why we also believe that it is important to develop a more proactive approach to resource management. We have to move away from decisions which are made based on current conditions and which then have to be reversed after only a few years, for example closing waterworks.

This is why we have taken a new direction with our “Masterplan Wasser” [Water Master Plan]. This should help us to proactively observe changes such as climate change and a growing population, as well as other factors, in the long term, and to think through the possible decisions which could be made in specific scenarios.” – Stefan Tidow

Berliner Wasserbetriebe have already reduced their carbon dioxide emissions by 50 percent since 1990, with programmes in place to further regulate energy consumption and demand.

The State of Berlin and the Berliner Wasserbetriebe (BWB) are key players in treating the city’s water. They are committed to reducing CO2 emissions which are created during the water treatment process. A joint climate protection agreement exists and it has introduced a range of energy-saving measures to increase efficiency.

As part of the Berlin Energy and Climate Protection Programme 2030 (BEK 2030), Berlin’s sewage treatment plants are working towards managing their demand for electricity, regulating their energy consumption and making it more flexible. There are plans being made to use the thermal potential of wastewater to provide heat for the various districts of the city and to use the thermal potential presented by local waste water at central pump stations as a source of heat for heat pumps. In the future, it is planned to also feed waste heat into the heating network.

The city of Berlin is well on its way to becoming a Water-wise City with many groundbreaking and inclusive initiatives.

More information on this exciting endorsement and the complete interview with Stefan Tidow, please read the kwb newsletter 4583.

Winning with Twinning – How digital twins...

The City of San Diego is in the initial stages of implementing the Pure Water San Diego program, which when completed in 2035, will supply at least 40 percent o...
EnvironmentSociety
Carolina Latorre October 12, 2015

Water Quality, the Next Big Challenge for W...

Rarely a day goes by without a news report, academic research or a government policy paper telling us that water security is at risk at a global scale. Identify...
Climate changeEnvironmentIndustry
Katharine Cross June 5, 2020

Photo by Gustavo Quepón on Unsplash This year’s theme for World Environment Day is Time for Nature, and with COVID-19  many of us are now taking the time...