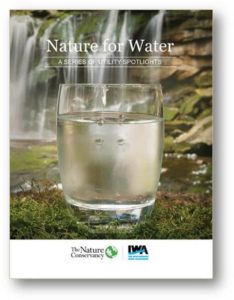 This spotlight is part of a publication of utility case studies intended to shed light on the opportunities and challenges facing regulators and water utilities in their efforts to incorporate nature-based solutions into water management. Access the publication here – Learn more about the partnership between IWA and The Nature Conservancy here.

From Polluter to Protector

In the early 2000’s, the utility faced public backlash when wet weather events led to sewage overflow, contaminating local waterways and Lake Michigan and causing beach closings. The State of Wisconsin filed a complaint against MMSD in 2005 for dumping more sewage into the lake than permitted by law (US EPA, 2019).  Negative perceptions of the utility were compounded by a lack of public outreach, education and a disconnect betwee 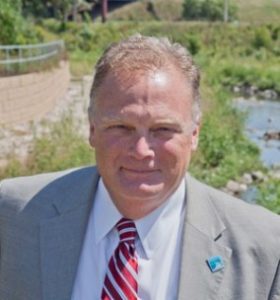 n public expectations and regulatory compliance. The public was less interested in the causes behind sewage overflows and easily swayed by media coverage and local politicians that portrayed the utility as a villain for harming the environment and posing health risks to Milwaukee residents (Rondy, 2006).

“We were viewed as the polluter and not the protector of the environment. I didn’t like that. I didn’t think that was right. We had to change our image” explains Kevin Shafer, Executive Director of MMSD. 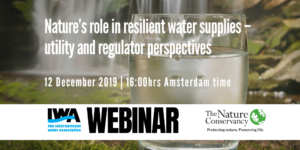 To learn more about the Milwaukee case, join the  webinar on December 12th at 4pm Netherlands time- register here.

The webinar shares lessons on effective multi-stakeholder engagement strategies, particularly in relation to building alliances with watershed stakeholders and customers. The webinar will also discuss the regulatory mechanisms which facilitate investment in natural infrastructure, focusing specifically on the regulatory environment in the United States

To date, the utility has invested over $4 billion USD to reduce sewer overflows, including the expansion of a large tunnel to store and convey wet weather flows. For the past 40 years, they have maintained a stream and lake monitoring program and a sewer separation project that identifies areas where storm flow can be rerouted. Investments in grey infrastructure were a starting point, but solving Milwaukee’s water quality challenges and changing public perceptions required a multi-faceted approach with residential involvement at its core.

As far back as 2001, before MMSD’s system was overwhelmed by record rainfalls, Kevin Shafer proposed an idea to his fellow utility leaders to reduce water pollution and improve regional water security: sell old pickle barrels to Milwaukee residents for installation on their downspouts. The barrels could collect rainwater to reduce stormwater runoff and consumption, thereby minimizing the risk of sewage overflows. They laughed at him for “thinking so small”.

Pollution of local waterways from overflow of sewers

MMSD additionally prioritizes the preservation and restoration of natural landscapes such as floodplains and wetlands. Their Greenseams® program helps reduce the risk of  flooding and water pollution by preserving land that contains water absorbing soils, specifically in areas expected to experience major urban development in the next 20 years. MMSD hired a national non-profit conservation organization, The Conservation Fund, to forge partnerships and manage the voluntary purchase of these undeveloped, privately owned properties. Wetland maintenance and restoration at the sites will increase water storage capacity, preserve wildlife habitat and create recreational opportunities for residents. MMSD is confident that allowing the land to better manage water flows will reduce the risk of downstream flooding. Their well-established Greenseams® program is an indication of the importance in connecting land management and water security in utility operational budgets.  To date, MMSD has purchased more than 4,000  acres of land for this program.

Milwaukee is the largest city in the highly agricultural state of Wisconsin and located at the downstream end of the Milwaukee River Basin. MMSD’s water supply and catchment area suffer from water quality degradation due to excessive levels of phosphorus, sediment and bacteria from urban and rural stormwater runoff. As a compliment to the Greenseams® the Working Soils® Program invests in partnerships with local governments and agricultural industry leaders to promote soil health as a tool to reduce pollution. Through the United States Farm Bill and the U.S. Department of Agriculture (USDA) Natural Resources Conservation Service (NRCS) Regional Conservation Partnership Program (RCPP), MMSD’s Working Soils® Program leverages local and federal dollars to permanently protect privately held agricultural land in the floodplain to safeguard its natural water storage capacity. The Conservation Fund works in coordination with watershed partners to offer land and resource management options to landowners. Many of the Greenseams® and Working Soils® floodplain protection priority areas overlap. This overlap illustrates the value in a multi-faceted application of NBS where community engagement efforts can positively reinforce one another to accelerate awareness, acceptance and conservation commitment.

As part of the Working Soils® Program and Milwaukee River Watershed Conservation Partnership with NRCS, MMSD staff coordinate with state and local governments such as county land and water conservation departments, planning divisions, and NRCS to facilitate implementation of conservation practices that improve soil health and mitigate future flooding. Reaching a common goal with the agricultural sector on prioritizing soil health for improved water quality was crucial, as farmers face pressures to grow more on less land, and the utility struggled to reduce downstream pollutants. Partnering with established agencies  USDA NRCS, the University of Wisconsin-Division of Extension, The Conservation Fund, and other trusted county and local agencies offered a solid foundation for the Working Soils® Program.

MMSD is regulated by the United States Environmental Protection Agency (EPA), who indicated support for NBS in 2007 by integrating green infrastructure into federal regulatory programs (US EPA, 2017). The EPA provides specific guidelines for integrating green infrastructure approaches into consent decrees, enforcement actions that are issued by a state or federal agency when an entity has failed to comply with federal environmental laws. MMSD’s NBS programs were initiated on a voluntary basis and not through a court order. However, several consent decrees with green infrastructure provisions have been implemented in the U.S. since 2003, presenting an interesting regulatory avenue to help solidify NBS as a standard in utility management.

The U.S. Clean Water Act requires renewal of operational permits on a 5-year cycle. MMSD’s Wisconsin Pollution Discharge Elimination System Permit expired in 2018, requiring the utility to conduct a series of infrastructure improvements. MMSD saw marginal impacts from the high cost grey infrastructure approach proposed by the EPA and the Wisconsin Department of Natural Resources to meet permit requirements. Having successfully surpassed the requirement to capture and manage  12 million gallons of water with green infrastructure in the previous permit (negotiated up from an original 5 million gallons), they felt confident that a target of 50 million gallons for the 2019-2024 permit could be accomplished. Proactively engaging with the EPA and Wisconsin Department of Natural Resources allowed MMSD to push forward their NBS agenda and showcase their outstanding results. Since inception, the utility claims approximately 39 million gallons of water is captured and stored by their green infrastructure program. MMSD’s results offer an important message to utilities struggling to prioritize NBS projects in a weak regulatory environment. Proactive engagement with regulatory authorities to formalize requirements for NBS involves acknowledging the opportunity in regulatory involvement, rather than seeing this presence as the sign of a problem.

MMSD’s funding options for NBS benefit from the fact that the utility is a regional government agency and tax authority. Each year, the utility budgets and distributes stipends for NBS projects across their municipalities, based on each area’s equalized property tax value. In 2018 this budget was calculated at $2 million USD, increasing to $5 million in 2019. The municipalities are required to vet their project proposals, which range from bioremediation facilities to green roofs, with MMSD for approval. MMSD designed this approach with the understanding that if they want to drive green solutions forward under tight public funding, they would have to provide financial support. They additionally founded the Green Infrastructure Partnership Program, a competitive RFP that offers incentive funding for green infrastructure strategies designed by property owners and developers.

With the goal of accelerating the pace of NBS implementation in the U.S., MMSD adapted their definition of “infrastructure” to include nature-based solutions. They have encouraged this shift at the federal level to ensure that green infrastructure initiatives can be incorporated into existing funding mechanisms. A transition appears to be taking root as the GLRI announced in early 2019 a grant opportunity for projects that expand green stormwater infrastructure in Great Lakes communities. Securing confidence in NBS as a viable option for meeting water quality standards remains a challenge in the engineering community due to perceptions of uncertainty on performance and the timeframe for impact. Therefore, mandates from the U.S. EPA to support green infrastructure initiatives can have significant impact in accelerating the growth of NBS programs across the country. In urging early stage conversations with regulators, MMSD has positioned themselves at the forefront of the movement.

Kevin Shafer recognized at an early stage that changing perceptions about the utility at a local level would involve more than statements. MMSD needed to demonstrate action with its promised commitment. Drawing the connection between the quality and quantity of Milwaukee’s water and land stewardship has called into play a broader set of actors to consider their impact on water sources. The utility has strategically invested in water management through a process of outreach, engagement and education, tying NBS projects to the local community and agriculture sector. MMSD’s programs demonstrate the substantial co-benefits that NBS can deliver beyond those related to hydrology

Showcasing water utility experiences and sharing knowledge will support effective policy-making and regulation to accelerate the adoption of NBS in water management. The International WaterAssociation (IWA) and The Nature Conservancy (TNC) are catalysing action between water utilities and their regulators by bringing these lessons and guidance into tangible practice among network members.

Webinar participants gain a deeper understanding of the practical implementation of NBS from a water utility perspective and be incentivized to consider the benefits of investing in these approaches for water security. The discussion shares lessons on effective multi-stakeholder engagement strategies, particularly in relation to building alliances with watershed stakeholders and customers. The webinar also discusses the regulatory mechanisms which facilitate investment in natural infrastructure, focusing specifically on the regulatory environment in the United States.

From providers to protectors: water utilities as catchment protection leaders From enforcers to partners: engaged regulators are more important than wise regula...