Gothenburg is Sweden’s second largest city after Stockholm, and the Nordic region’s fifth largest with about 550,000 inhabitants in the urban area and 1 million inhabitants (2016) in Greater Gothenburg. The community is located on the west coast at the Göta älv River estuary. The City of Gothenburg was built on the initiative of King Gustav II Adolf and received its charter in 1621.  Due to the similarities in urban design, Gothenburg was once known as the “New Amsterdam”, and later when it became more industrialised in the 1800s by British immigrants, the city was nicknamed “Little London.”

For over 250 years, the City of Gothenburg drank untreated water taken directly from the moat and canals. The same water source was used simultaneously as a transport route and waste site. It would have to do for the city’s inhabitants until the spread of disease became unmanageable. The Sustainable Waste and Water Department has been responsible for the production and distribution of drinking water since 1787. Then the raw water came from “King Gustavs Water Well” and the water was distributed in wooden pipes to the city centre. In the late 1800s there was a great water shortage due to a growing population and a new treatment plant was built in the Delsjö area. The water in the Delsjö lakes soon ran out and slow filters for infiltration of the Gota river water at the Alelyckan treatment plant were put into operation in 1892. Populations continued to increase, perpetuating water shortage problems until the Gota River was examined as a raw water source and investigations were carried out. In 1949, a new waterworks strategy was put in place, and chemical precipitation was added to the Alelyckan treatment plant. The department proposed a solution with intermediate storage of river water and construction of a new water treatment plant at Delsjö lakes, the Lackarebäcks waterworks, which came into operation in 1968. The same methods are used for the Gota River as a primary raw water source and storage of raw water in Delsjö lakes, providing both water supply with water from Delsjö lakes where raw water intake are from the Gota River.

Gothenburg was the first Swedish city that had a sewer system. Already in 1866, the city had implemented this system, as 3500 people (17% of the city’s population) died after a waterborne cholera epidemic in 1830-1850. In 1866, an action plan was developed for the drainage of the city. The wastewater was then routed instead to the pumping stations that pump the untreated wastewater into the Gota River and the Great Harbor Canal. The City’s first sewage treatment plant was built in southwestern Gothenburg in 1953 for the new districts in the west. In the 1950s, sewers for discharging wastewater were built in the city. In 1960, the utility that manages both water and sewage was created. In 1972, the municipal company Gryaab and the Ryaverket Wastewater Treatment Plant was created and a treatment plant was commissioned. Since then, the Ryaverket sewage treatment plant has been expanded several times and is now a full degree wastewater treatment plant with mechanical, chemical and biological treatment. Ryaverket is owned by the regional municipal company Gryaab which is owned by the City of Gothenburg  (71.4%). Gryaab is also owned by six other municipalities.
Sustainable Waste and Water is a department within the City of Gothenburg and the largest water and waste utility operated as a department and not as a company in Sweden. The department dates back to 1787, but was officially founded in 2013 and is the first department in Gothenburg which is responsible for water, sewage and waste collectively. Sustainable Waste and Water is responsible for drinking water production, distribution, waste and storm water collection and drainage and wastewater treatment as well as the collection and treatment of domestic waste. The department has provided the residents of Gothenburg with drinking water since 1787.

Gothenburg is continuously developing and becoming a denser City. New neighbourhoods are being built in areas that are attractive, but are also difficult and challenging to build. They are low-lying, near the river and often consist of filling material on clay. The city is building more densely, between the houses, and even in existing buildings. In the new parts of Gothenburg where construction is taking place, there is a need for functioning water and sewage systems. The most difficult challenge is to have sustainable stormwater management. Building pipes underground for diversion is no longer a viable option. Stormwater must be kept at the surface to equalize flows, reducing the risk of flooding and if necessary treat the stormwater. Therefore, exploiting traffic areas, parks and other areas where there is competition for surface area. To succeed with stormwater management, water professionals cannot continue to work in isolation, but must collaborate with others and compete for the expensive spaces in the street environment. Traffic planners, city planners, and park planners must work across silos to embrace goals of sustainable stormwater management and also need to understand the goals within their professions to succeed. Innovation and daring to implement untested solutions is a necessity for the future. 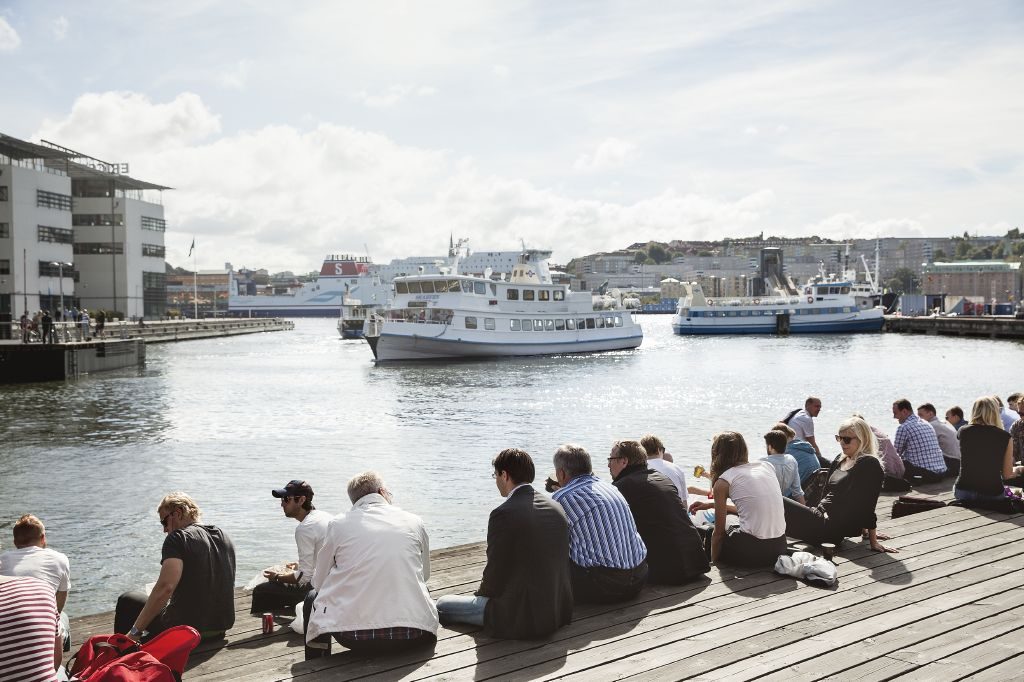 The area on the north side of the river, known as Norra Älvstranden, has undergone a rapid development. Where there used to be heavy industries a whole new neighborhood has emerged with restaurants, cafés and a vivid life centred around the docks and the waterfront.

The political boards of the Traffic administration, Environmental Department, City Planning Authority and Department of Park and Nature is this spring embracing the IWAs Principles for Water-Wise Cities together with the Municipal board. The Department of Sustainable Waste and Water has also, since March 2017, coordinated responsibility for stormwater and extreme rain events for the City of Gothenburg.  Working closely together with the City Planning Authority and the Traffic administration, the Utility and its partners strategise for new plans for stormwater handling in all new city Master Plans. Gothenburg must plan to operate under both normal and extreme rainfall and plan to minimize and mitigate the potential damage to achieve a better quality of surface water. The IWA’s Principles for Water-Wise Cities are also being implemented by the Planning Departments of the City, along with a new thematic addition to the Master plan of Gothenburg for flood risk management which manages the levels of planning when the city will have extreme rainfall events and increased sea and river.  Gothenburg is its way to becoming the world’s best city when it rains.

Relationship to regulators and/or tariff system

In Sweden, the water and sewerage operations are regulated by the Act on public water services (Lag (2006:412) om allmänna vattentjänster). According to the Act on public water services, the operator of water and sewage services, which are always the municipalities as a department or a municipal company, cannot earn money on the water services. The fees charged for running the business may not be greater than what is needed to operate and arrange for water and wastewater operations. The tariff must be set by the highest political board, the City Council, for each municipality. The Utility’s spending and income are reported annually and made available publically to ensure complete transparency.

Right now, common plans have been put in place with other municipalities to ensure sustainable water supply; similarly, an approach is also in the works to identify opportunities to make wastewater collection and treatment more sustainable across the same municipalities.

Actions aligned to the IWA Principles for Water-Wise Cities

Regenerative Water Services for All