Drainage channels built in early years in Hong Kong were designed primarily for flood protection purpose with less considerations on environmental protection or ecological conservation. To address the impacts of global climate change and in response to increasing public awareness on the importance of protecting water ecology and the effective utilization of public space, the Drainage Services Department (DSD) of the Hong Kong Special Administrative Region has taken a big stride in their initiatives of flood protection and revitalisation of water bodies. Drainage channels built in recent years employ effective eco-conservation elements to enhance greening, biodiversity and aesthetic improvements in addition to effective drainage. This river revitalisation approach can be exemplified by the river improvement works in Upper Lam Tsuen River.

The Lam Tsuen River is located in the central New Territories, originating from the northern range of Tai Mo Shan (the highest mountain in Hong Kong) at the height of 740 m above sea level. The main stream of the river flows north through Lam Tsuen Valley, winding pass a number of indigenous villages with history of over 700 years and converging with Tai Po River at Tai Po New Town, before finally entering Tolo Harbour. Lam Tsuen River is about 10.8 km long with a catchment of approximately 1,200 hectares. Upper Lam Tsuen River is one of the some 30 ecologically important streams in Hong Kong, providing habitats for rare wildlife species, such as the Hong Kong Newt (Paramesotriton hongkongensis) and Goby Fish.

In the 1990’s, the Lam Tsuen River Valley had been consistently threatened by flooding during severe rainfall. In 2007, the DSD undertook the “River Improvement Works in Upper Lam Tsuen River” to alleviate the flood risk in the region by straightening, widening and deepening 2.6 kilometers of the upper river. Given the extraordinary conservation value of Lam Tsuen River, DSD has been committed to conserving the river ecosystem whilst undertaking river improvement works in Upper Lam Tsuen River. A series of conservation measures were put in place during the design, construction and post-construction stages to preserve the original course of the stream, maintain biodiversity, and to minimize the environmental and ecological impacts as a result of the works. 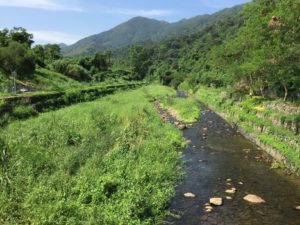 The DSD endeavored to preserve the original natural river course as far as practical. Some sections of the river with sufficient drainage capacity were undisturbed. When river widening was necessary, only one side of the river banks was modified while the other side of the natural river banks was left intact. Besides, environmentally friendly gabion units were used as new river banks to allow plant growth among the gaps in the gabions and to cultivate a natural ecology within the riparian zones. Some 1,140 number of trees were planted along the new river edges. 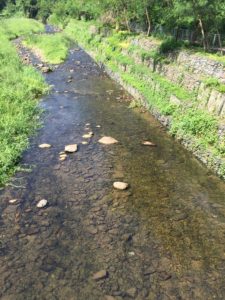 Natural bedding materials excavated from the original river beds were temporarily stored off site during construction and re-used for reinstating the river channel upon completion of drainage improvement works. The river bed was reinstated with randomly placed cobbles and boulders reserved from the original riverbed materials with pools and shallow shoals which would simulate the original natural stream environment and provide ideal habitats for native fishes and macro-invertebrates. Zigzag fish ladders were built across cascades in the new river bed to aid fish and other aquatic creatures to travel upstream, thus maintaining an ecological continuity along the river channel. The fish ladders also provide recesses which offer fish and other aquatic creatures resting places during their journey upstream. 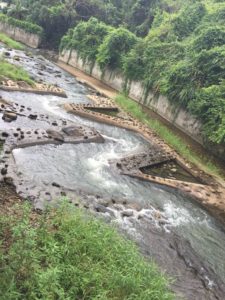 The Lam Tsuen River is a breeding site of the Hong Kong Newt, Paramesotriton hongkongensis, classified as “Near Threatened” by the International Union for Conservation of Nature. To mitigate the impact of the construction works on the rare species in the Lam Tsuen Valley Basin, pre-construction capture surveys were conducted outside rainy season. Endemic Hong Kong Newt and other fauna species in the affected channel section were captured and relocated to areas not affected by construction works. A four years post-construction ecological monitoring was conducted, the results of which have revealed that the numbers of wildlife species including birds, fish and dragonflies has returned to pre-construction levels. Aquatic and riparian vegetation was re-established quickly after the completion of the drainage works. Aquatic and marsh plants growing on the riverbed and along the water margins provide breeding and feeding habitat for a variety of aquatic life including insects, shrimps, fish and the Hong Kong Newt. The number of newts in the Lam Tsuen River is higher than before as it increased from about 200 in the pre-construction baseline monitoring to about 700 in 2017. It is testimony to the success of the ecological conservation measures conducted. 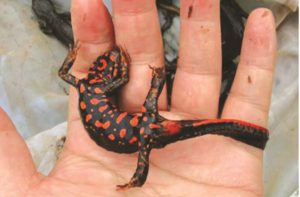 Hong Kong Newt captured in Lam Tsuen River. This endangered species of Newt choose domicile in clean and oxygen-rich river environment and is a bio-indicator for water quality.

In conclusion, the Upper Lam Tsuen River improvement works have demonstrated the success of river revitalisation approach, an integration of flood protection and biodiversity conservation. With care and determination, river improvement works should not create a decline in biodiversity but on the contrary, ecologically rich and natural environment can be preserved during construction and sustained on completion of the works.

Upper Lam Tsuen River is one of the highlighted technical visits in the coming 8th IWA-ASPIRE Conference and Exhibition – Smart Solutions for Water Resilience to be held in Hong Kong from 31 October to 2 November 2019.

The IWA-ASPIRE 2019 has been established in promoting communications and collaborations within the Asia-Pacific region. In addition to the cooperation and collaboration, it is a platform for sharing the best practice, growing in knowledge and strengthening the bonding in the sector. The Conference & Exhibition will be held from 31 October to 2 November 2019 in the Hong Kong Convention and Exhibition Centre. The 3-day Conference and Exhibition plus technical visits and workshops will attract 1 000 participants all over the world.

Civil engineer at Hong Kong Drainage Services Department
Keith TAM was retired from the Drainage Services Department, the Government of the Hong Kong Special Administrative Region in 2014, after 36 years of working on wide spectrum of civil engineering works in public and private sectors. He was the projec... Read full biography
AfricaAsia-PacificClimate change
Raul Glotzbach October 3, 2016

Strengthening the data-policy link to addre...

Technology for the recovery of energy from wastes – Achieving Self-sustenance in Sewage Treatment Plant   The successful operation of a Sewage Treatm...
Asia-PacificDigitalisation
Bruce Johnson October 12, 2022

What can we learn from an industry-first Di...

The application of Digital Twins in the global water industry is a hot topic and I’m encouraged that the benefits of these innovative tools are being more wid...
Sorry ! This author has no more posts.