Gender and Water Security: The Rest of the Puzzle

Society
Female researcher checking the water quality from a river

Ask most people what the link between gender, poverty and water is and they’ll refer to the role of women in collecting water. However, this focus on domestic water supply is only one piece of a much bigger puzzle linking gender and water to natural disasters, food security and even child marriage.

The burden of water collection for women is particularly acute in Sub-Saharan Africa and rural Asia. In Sub-Saharan Africa, women bear the main responsibility for fetching water in 62% of households, compared to men (23%), girls (9%) and boys (6%). As a result of the time spent finding and carrying water (sometimes hours each day), women and girls have less time to improve their lives through education, work and leisure.

However, it’s important not to limit the discussion of water and gender to the home sphere. Reducing time burdens associated with water collection shouldn’t be the only goal; we should be aiming for women’s inclusion in every aspect of water management.

If we look beyond water for drinking, cooking and washing, we see that women play a crucial but often unrecognised role in managing water for livelihoods and food security. In Eastern Africa, 29.9% of rural households are headed by women and globally women count for 43% of the agricultural labour force. However, women are often marginalised from decision making and lack access to land rights, credit andagricultural extension services. Without access to technologies like pumps, or decision-making over how irrigation water is allocated, women are unable to use water control to increase agricultural productivity.

Water security risks are skewed towards women. For example, more women than men die as a result of natural disasters. In Bangladesh, poor and disadvantaged women face huge challenges during and after floods, including stress, physical injuries, exposure to disease, sexual harassment and difficulties sourcing food, clothing and fuel. 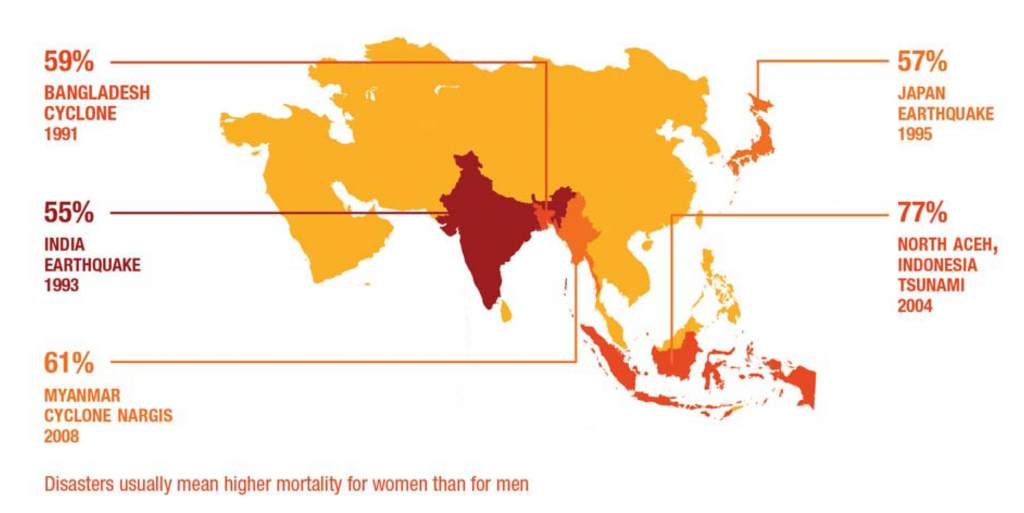 The way in which poor families cope when hit with floods and droughts, affects women and girls in alarming ways. For example, flooding has been found to weigh on decisions to marry young girls. In Bangladesh, girls carry the burden of a dowry which must be paid to the groom’s family when she marries, and older girls tend to carry a higher price. Poor families may opt for ‘cheaper’ child marriages due to the economic hardships caused by climate extremes such as floods and cyclones.

In India, low rainfall has been linked to an increase in ‘dowry deaths’ or bride killings (usually engineered ‘burning’ by the groom’s family made to look accidental) in order to secure further dowry from another bride. Women using sex to secure monetary or in kind payment in response to drought might be increasing HIV prevalence in rural Africa.

The facts clearly show that we can’t achieve water security for the poor without thinking about gender. Gender mainstreaming is often used as a buzzword. But, defining authentic mainstreaming presents an exciting opportunity to involve women in the design, planning, implementation of water services, management of natural resources, and in the development of disaster risk reduction strategies. Women’s complex role in water management and access cannot be ignored, and gender-insensitive policies will only stall global efforts to end poverty.

This blog originally appeared on the REACH website and is part of a series leading up to the Water Security 2015 conference on 9-11 December in Oxford – http://www.watersecurity2015.org.

REACH is a new global research programme to improve water security for the poor by delivering world-class science that transforms policy and practice.

Wise Use of Water With Smart Technologies

Responding to a drought of historic severity, California has started pilot programs installing smart water meters that detect leaks and optimise the use of wate...
Society
Christian Loderer December 18, 2018

Valuing water, the SDGs, IWA and other topi...

Collaboration for a Water-Wise World | Part...

Water managers and the myth of best practice Managing urban water challenges lies at the heart of a sustainable future and drives my work in the sector. As a co...
Sorry ! This author has no more posts.