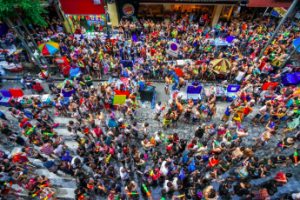 Thailand’s Songkran New Year Festival celebrations were typically wild and wet this year, with Bangkok’s streets becoming an enormous water fight. Symbolically, Songkran marks the end of the dry season and the start of the rainy season, as well as the Lunar New Year. It’s unlikely the many tourists who participate in the festival noticed, but this year it took place against a backdrop of a prolonged drought. Despite its religious significance, the drought is so severe that the authorities clamped down on water usage during the festival.

After successive years of low rainfall, many in Thailand are fervently hoping that this year will see a strong monsoon. Without it, already strained water supplies are likely to reach critical levels in the summer. The amount of water stored in the four largest dams in Thailand’s Chao Phraya River basin stands at 2.5 billion cu/m, less than 14 percent of total capacity. This is one of the most agriculturally rich areas of the country, and the basin supplies water to its largest city and economic powerhouse, Bangkok. The consequences of drought will be felt by millions of people.

It is already affecting around 300,000 farmers, who’ve been advised by the Royal Irrigation Department to expect a faction of the usual amount of water for crop irrigation, and have been told not to plant a second crop this year. The knock on effect for power generation, industrial output and domestic water supply is expected to cut the country’s economic growth by up to 0.8 percent in 2016, costing the country around US$3.4 billion.

One of the most costly natural disasters of all time

Ironically, only five years ago, Thailand hit international headlines for what would become one of the most costly natural disasters of all time. In 2011, massive rains overwhelmed the flood defenses in the Chao Phraya basin, causing devastation in Bangkok and elsewhere. The World Bank estimates that the floods caused over 700 deaths; affected an additional 10 million people; and caused US$48 billion dollars worth of damage.

Floods are dramatic, resources are scrambled to address the immediate impacts and longer-term infrastructure needs, and they attract huge media coverage. Droughts, though, can last for years before the world takes notice. The drought now affecting Thailand began in 2012, only a year after the floods; without a successful monsoon, the results could be just as devastating for Thailand and the wider Southeast Asia region.

What is happening in Thailand is true in almost every corner of the world. Flood and drought events are becoming increasingly common, more severe and less predictable. Climate change is the major driver, but a growing global population, urbanisation, changing land use, and increased demand for water from agriculture and industry are piling pressure on water resources at a time when water scarcity is growing.

Risks are multiplied in transboundary settings

Hydrological uncertainty dramatically increases risks for many countries, affecting the organisations responsible for managing river basins, as well as end-users such as water utilities and industries. These risks are multiplied in transboundary settings, when river basins – often the main source of a country’s water supply – are shared between two or more countries where political and economic competition can obscure transbounday water cooperation.

Globally, there is a growing sense of urgency around the need to improve resilience within river basins, and for this to become a critical part of water management planning. The IWA and DHI are working with partners around the world on an innovative Flood and Drought Management Tools Project, that can help basin authorities, water utilities and other stakeholders better prepare for water related risks.

The Flood and Drought Management Tools Project, which works with stakeholders in three pilot basins – the Chao Phraya in Thailand, Lake Victoria in East Africa and the Volta in West Africa –aims to include information on climate change and land use changes into existing planning approaches to improve the ability to recognise and address the increased frequency, magnitude and unpredictability of flood and drought events.

The project is developing a computer software-based planning tool, a Decision Support System, collating multiple sources of flood and drought data in one flexible user-friendly interface. The project is developing a methodology for river basins and water utilities that uses tools within a decision support system that allows the integration of information on floods and droughts into planning from transboundary to local water utility level.

For basins like the Chao Phraya, it will be an invaluable tool to assist planning for the impacts of extreme weather events, and will allow those on the front line of water management to be better prepared in a rapidly changing world. It may even help make sure the Songkran celebrations continue to go with a splash.

The FDMT project is a Global Environment Facility (GEF) funded and United Nations Environment Programme (UNEP) coordinated project, in which DHI and the International Water Association (IWA) are implementing partners.

City and utility leaders who embrace both natural and engineered water infrastructure will not only meet future water demand; they will reshape our planet’s l...
Climate changeEnvironmentIndustry
Katharine Cross June 5, 2020

Photo by Gustavo Quepón on Unsplash This year’s theme for World Environment Day is Time for Nature, and with COVID-19  many of us are now taking the time...
AfricaClimate changeSocietyUrbanisation
Lisa Andrews December 2, 2016

I recently worked on developing the Dakar City Water Story as part of the IWA’s Cities of the Future Programme. Learning about Dakar’s well-established urba...
Climate changeEnvironmentUrbanisation
Paul Bell January 7, 2015

Learning to Live with Water in the Chao Phr...