The city of Fez: Technical and Institutional strengthening for a sustainable management of water resources

The imperial city of Fez, listed as a UNESCO World Heritage Site since 1981, currently has a population of 1,200,000 inhabitants. Located in the center of the Sebou basin, it covers an area of 100 km2. Water supply security, industrial pollution and flood risks are the main challenges facing the city. These issues are mainly addressed, in a concerted and participatory approach, by the integrated water resources development master plan of the Sebou basin (PDAIRE).

Numerous projects mainly focused on the protection and preservation of water resources are being carried out thanks to a common and shared vision adopted by all stakeholders at different scales and the pooling of human and material resources. The goal of this approach is to adopt an inclusive and lasting water management strategy to promote sustainable development. 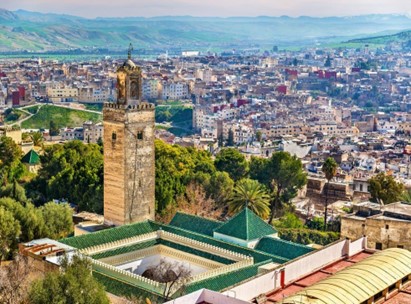 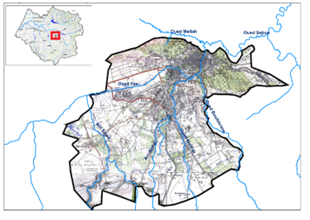 The City of Fez was founded on the banks of the Oued Fez at the confluence of several rivers. The city has experienced excessively violent floods in the past that have caused significant damage, and is further threatened by the effects of climate change. Measures and arrangements for the protection of the population and their property have been set up in partnership between the stakeholders concerned (Ministry of the Interior, Ministry of Public Works, Regions, Local Authorities, Basin Agency, etc.). These measures have benefited from financial support of the FLCN (Fund for Fighting Against Natural Disasters) managed by the Ministry of the Interior.

The city has a large water supply network managed by the Régie de distribution d’eau et d’électricité de Fès (RADEEF). The city’s drinking water supply rate is 100% and is primarily from the Saiss aquifer. However, the overexploitation of this aquifer, which is already in deficit, is impacting security of drinking water supply in Fez. Therefore, alternative solutions must be put in place using surface water from the Sebou River, although industrial pollution from local industries is an ongoing problem.

In addition to the water supply network, RADEEF manages an urban wastewater collection network, with a connection rate of about 90%. Since 2014, an activated sludge treatment plant is treating the wastewater. The purification efficiency of this wastewater treatment plant (WWTP) varies depending on level of  industrial activity. The treatment of accumulated sludge is through belt filters, and a biogas system has also been set up to provide the energy needed for the WWTP facilities.

Industries such as tanneries, copper workshops and oil mills do not have treatment or pre-treatment systems meaning that there are fluctuating pollutant loads, and serious pollutants such as heavy metals entering the environment. The industrial pollution has seriously inhibited the functioning and efficiency of the WWTP as there is little treatment prior to discharge. This has led to pollution of the Sebou River which impacts water use downstream including:

The Master Plan for the Integrated Management of Water Resources in the Sebou Basin (PDAIRE) focuses on the sustainable management of water resources in the Sebou basin including the issues of water security, flooding and pollution issues within the city and the wider catchment. A specific plan for the city of Fez has also been included in the PDAIRE. The plan was developed with a participatory and concerted approach with all concerned stakeholders and has initiated projects to protect and preserve water resources while supporting the city’s socio-economic development of the city.

The RADEEF is also making numerous efforts to improve the output of the drinking water distribution networks, especially in the old Medina. Leakage or non-revenue water across has decreased from 40% in many parts of the city to about 20% currently and is expected to be less than 10% in the future.

To ensure the proper functioning of the WWTP, an industrial pollution control programme was established by the partners concerned including the Hydraulic Basin Agency/Sebou, RADEEF, Fez Municipality and the Department in charge of the Environment] . The involvement of industry was essential for the success of this programme in recognising the impact of urban industry on the wider catchment. Numerous meetings and awareness workshops have been organized for the benefit of  industries.

This industrial pollution control program has focused on the most polluting industrial units, namely:  a large soft drink company, a yeast factory, a brewery and a textile unit, in addition to tanneries, coppersmiths and olive oil mills.

Tanneries: These are a historical activity within the Medina of Fez. However, leather working generates a lot of chromium. The chromium effluents are collected and transported by tanker to the dechromatation station. This station recovers 90% of the toxic chromium rejected by the tanneries, which is reused by the tanners.

Copperware: Following a support program for the copperware workshops in the Medina of Fez, simple facilities and tools to reduce metal losses have been put in place in these units in order to reduce pollution at the source. These are essentially “soaking baths” that allow the reuse of water and reduce discharge rich in heavy metals.

Four other units are equipped with high-tech autonomous treatment systems, or pre-treatment systems. These systems reduce and homogenize the pollutant load into the city’s sewage network. .

This program has been carried out through agreements between all stakeholders, with financial contributions from government departments and industries.

To address this problem, many actions have been taken to reduce the levels of pollution through a cooperative approach including all relevant departments and stakeholders. These actions consist of 1) organizing awareness meetings with the owners of oil mills to propose technical solutions to the problem; and 2) providing information on how the owners can benefit from financial aid be implementing pollution control mechanisms. Thanks to these meetings, some oil mills have been brought up to environmental standards, although there are still some that need to take action.

Several measures have been implemented within the framework of a program for protection against flood risks, in partnership between all the stakeholders concerned (Ministry of the Interior, Ministry of Equipment, Municipality, Basin Agency, etc.). These measures have received financial support from the FLCN (Fonds de lutte contre les catastrophes naturelles) which is managed by the Ministry of Interior.

In addition to structural measures, flood warning and prevention systems are needed for flood risk management. A telemetry system was implemented in 2012 to predict and announce floods in the city of Fez. This system provides alerts to parts of the city exposed to the danger of floods.

Water planning processes at the basin scale have been undertaken with a participatory approach actively involving all stakeholders who identify challenges and develop an action plan. The monitoring committee of this was set up by the Wali (Prefect) of Fez. 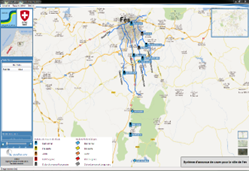 Announce floods System in the city of Fez

To address all water-related challenges, it is necessary to:

To address the problem of oil mill discharges, the clean-up process began in 2004 with feasibility and evaluation studies and. This project was then developed by the International Office for Water and local stakeholders. The project description, including technical, legal and financial aspects, was presented to donors at COP23, in 2017.

A pilot project for the treatment and recovery of waste produced by olive oil mills was set up in cooperation with the Japan International Cooperation Agency (JICA). The project tested Japanese technology for the treatment and recovery of by-products from olive oil mills. This was an “Oil Temperature Decompression Dryer” technology which separates, from oil, solid matter and water.  Positive results were observed, and the technology has been integrated into the ongoing phase of the clean-up process.  The proposed long term solution is to relocate all olive oil mills to outside the city and provide a specific area to manage and treat discharge from the oil mills prior to release to the environment. Secondly, a financial partnership agreement including all stakeholders and oil mill owners must be developed and signed for the project to be implemented, which includes the commitments of all stakeholders.

☒  Loss of credibility and trust

The Fes Autonomous Board of Drinking Water and Power Supply (RADEEF) is a public establishment of an industrial and commercial nature, with legal personality and financial autonomy, placed under the supervision of the Ministry of the Interior.

RADEEF was created by a decision of the municipal council of the city of Fez on April 30 and August 29, 1969 by virtue of Dahir n° 1.59.315 of June 23, 1960 relating to the communal organization, and this after the expiry of the concession contract with the Compagnie Fassie d’Electricité (CFE) for the distribution of electrical energy.

Currently, RADEEF ensures the distribution of water and electricity as well as the management of the liquid sewerage network within the city of Fez and the commune of Ain Chkef. It is also responsible for the distribution of drinking water in the urban communes of Sefrou and Bhalil as well as in the following rural communes: Bir Tam-Tam, Ras Tabouda, Sidi Harazem, Ain Timgnai, Ouled Tayeb, Douar Ait Taleb and Douar Ait El Kadi.