Establishment of Basin Boards to restore water quality in the Densu River, Ghana

Establishment of Basin Boards to restore water quality in the Densu River, Ghana

The Densu River forms part of the Coastal River System and serves as a source of drinking water for 74% of the population in greater Accra, the capital of Ghana. Water quality in the Densu River is adversely affected by inappropriate waste disposal, agrochemicals, and degradation of the riparian zone (among others). The Water Resources Commission (WRC), which has the mandate to regulate and manage Ghana’s water resources, developed an action plan interventions targeted at the rehabilitation and preservation of the ecological stability of the Densu River Basin. As part of this plan, the Densu Basin Board was established to facilitate joint efforts for better water management. Through a number of activities, including workshops, awareness raising, institutional collaboration and development of policies, the overall water quality improved over recent years, which has benefited downstream stakeholders including greater Accra and Tema. Waste disposal sites were relocated, planting of vegetation reduced the degradation of the riparian zone, and erosion reduced. The overall awareness was increased and Integrated Water Resources Management Plans are in place. 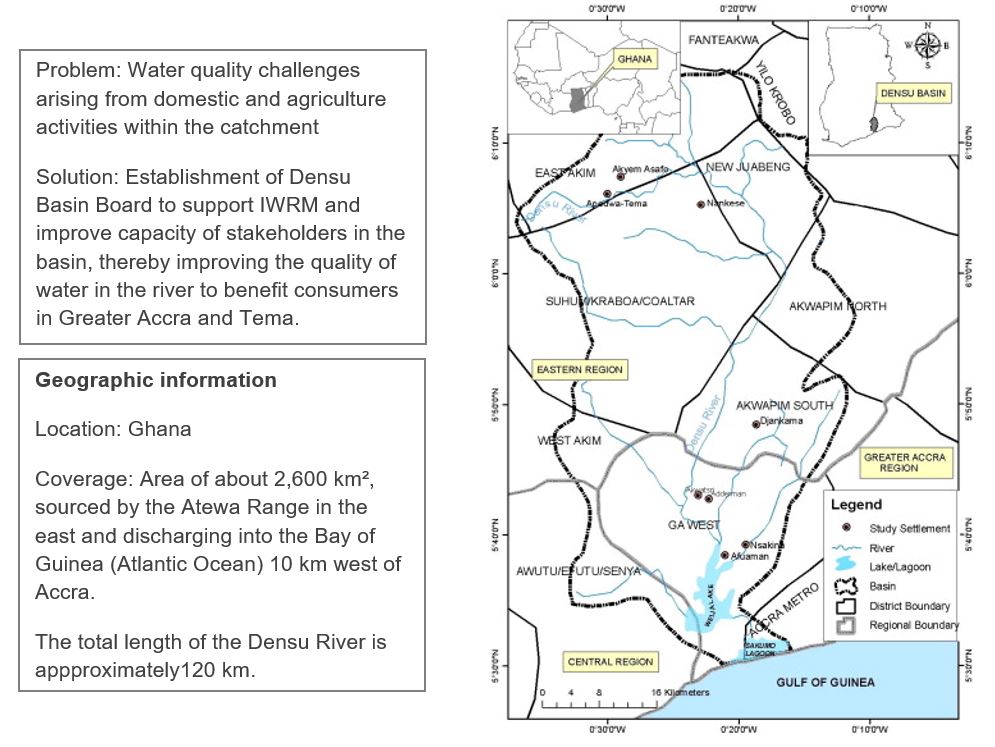 Ghana as a country is well endowed with water resources, and has three main river systems. The Volta river system basin, covering about 70% of the entire country, the Southwestern River System covering 22%, and the remaining 8% comprise of the Coastal River System. The Densu River forms part of the Coastal River System and serves as a source of drinking water for 74% of the population in greater Accra and Tema municipal areas of Ghana. Current population trends in urban and peri-urban areas, together with agricultural activities translate into challenges for water supply.

As first response to these challenges, a rapid environmental assessment of the Densu River was undertaken to provide adequate information on the environmental impact of human activity in the river basin. The findings of this study (Nii Consult 2001) revealed land degradation, water quality degradation and water shortage as some of the problems in the basin, caused by:

·         Use of agrochemicals in farming and harmful chemicals in fishing, (food crops and rearing of animals) on the banks of the river;

·         Indiscriminate harvesting of wood from the micro-catchments of the river;

·         Encroachment and expansion of urban settlement within the riparian buffer of the river;

·         Inappropriate disposal of solid and liquid waste from local government authorities, farms, domestic and industrial sources into the river;

·         Inappropriate behavioral attitudes in communities that pollute the river; and

·         Mining, including sand mining and quarrying in and around the riparian buffer.

Based on the findings, an action plan was developed for the implementation of interventions targeted at the rehabilitation and preservation of the ecological stability of the Densu River Basin. This action plan had the objective to ensure improvement of water quality of the river system and hence improve public health, while at the same time maintaining livelihoods.

The Densu Basin was identified in the Water Resources Commission’s (WRC) strategy as an urgent case for a pilot basin planning approach (WRI, 2000). Following the Accra city implementation plan for ‘Managing Water for African Cities Project’ (sponsored by UNCHS (Habitat) / UNEP), the Densu River Basin was chosen as the focal point for the environmental component of the Accra city plan, to focus on the mitigation of environmental impacts of urbanization in the basin. The Densu River Basin needed a wider basin planning approach that involved stakeholder participation, awareness raising, public meetings, capacity building and training, as well as environmental engineering. To support this agenda, the Densu Basin board was inaugurated in March 2004, with representatives from a wide range of stakeholders within the basin.

2.1 The Densu Basin Board

The basin traverses about 13 local authority boundaries. Members of the Densu Basin Board (DBB) were chosen through a consultative process. The DBB plays an advisory and consultative role in the management of the Densu River. The work of the board is mainly facilitated by a secretariat as a decentralized entity of the WRC. The DBB membership combines the following:

1.  A chairperson appointed by the WRC

2.  A representative of the WRC

3.  One person representing each of the following bodies within the basin:

·         Local Government authorities (from Greater Accra and the eastern region)

The local government authorities, Ghana Water Company Limited (GWCL), other governmental organisations and civil society all collaborate to support the management of the Densu River. Activities for collaboration include:

Technical workshops: Technical workshops were held annually to discuss developmental issues within the basin and also build the capacity of the board members to support their activities. Local government authorities gained a better understanding on how their activities within their jurisdiction affected the river, and began to implement projects and policies that took water issues into consideration.

Ecological Tour: Board members also carried out an ecological monitoring tour in the basin, from the source down to the mouth of the river. This tour helped to identify areas of encroachment and hot spots, and the general state of the basin.

Education and Awareness Creation: With the support of the education service, civil society and media, members develop and package educational messages to different target groups to educate and raise awareness on the protection of water quality and other related subjects. The local government authorities thereby support civil society to undertake awareness raising and education.

Institutional Collaboration and Synergy: Through the board, targeted results oriented programmes were developed with the major objective of improving the water quality in the Weija Lake and to reduce the cost of treatment by the water supply utility organization (GWCL). The collaboration among the institutions created synergy in most of the programs implemented.

Development of Policies and Plans: A riparian Buffer Zone Policy, which seeks to protect and maintain the native vegetation within these zones to improve water quality, was developed. The Densu Integrated Water Resources Management (IWRM) Plan was completed, together with action plans.

Establishing the basin board had its own challenge. The basin board traverses 13 local government authorities and not all could be chosen to be on the board. Representatives from the different sectors are often aged as the representatives are often close to retirement, and some no longer have the authority to make certain decisions on behalf of their organisations during board meetings. Frequent transfers and change of leadership of the various representative organisation, also affected the activities of the board. Water users had an initial difficulty paying for raw water charges, which was one of the core activities of the board.

3.2 Improvements, what is next?

Despite the challenges, there has been a tremendous improvement in water quality from the Densu River over the years. Some waste dumping sites adjacent to the river were removed, at the Nsawam Bridge (midstream Densu River), and at Kasoa (Jei River a tributary of the Densu). The Suhum/Kraboa/Coaltar District Assembly also relocated its dumping site to avoid polluting the river.

In general, the presence of the DBB and its monitoring activities within the basin has increased awareness in various communities on the need to sustain environmental conservation practices. Before the establishment of the Commission and hence the board, one of GWCLs major challenge in the Weija Lake was eutrophication, which heavily affected water treatment activities. This pressure has reduced to date.

The Water Resources Commission embarked on a systematic water quality monitoring program in 2005 and 2006 in the Densu Basin to determine trends in water quality. Four monitoring sites were included in the program (i.e. Potroase), which is at the source of the river, Mangoase and Nsawam at the midstream and Weija Lake at the downstream.

The index indicates the degree to which the natural water quality is affected by human activity. Results showed that the quality of the river has improved from the source to the Weija Reservoir.

Successful implementation of IWRM in the Densu Basin through the establishment of basin boards led the WRC to adopt the same principles to other river basins in the country. Currently an additional five (5) basin secretariats have been set up with fully established boards to protect and conserve water resources in the country. These include the White Volta and Black Volta Basins (which are transboundary basin in the Volta River System), the Pra, Tano and Ankobra Basins in the South Western River System. All the basin boards have their individual IWRM Plans using the same process adopted for the Densu.

3.3 The success of the Basin boards

With the collaborative support from the board, the following achievements have been made: