Kunshan, a city in the north-west of Shanghai, China, that inhabits more than 1.6 million people, is one of the most economically successful county-level administrations in the Jiangsu Province. Kunshan with its complex landscape is a “Water city” that has more than 100 polders and over 1000 km of waterways connected via pumps and gates. Increased urbanisation and rapid economic growth in the recent decades present a great threat to the water environment of city that has historically underpinned the liveability of the city. As a result of poor drainage system and catchment pollution, the water quality in its extensive network of constructed canals is inevitably degrading. Kunshan has also faced frequent inundation throughout its history owing to its low-lying nature.

Climate change is likely to increase the fragility of Kunshan in regards to storm-water management. The city has adapted to these risks by adopting a polder landscape; a low-lying land tract enclosed by dikes having connection to waterways. A city-wide strategy has been devised by Kunshan City and the Cooperative Research Centre for Water Sensitive Cities (CRCWSC) to mitigate the risk of floods and to reduce the urban pollution into regional waterways. The effective partnership with stakeholders and significant investment by private sector and city agencies has made Kunshan a water-wise or sponge city and catalysed research and development. 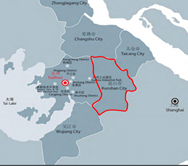 Adoption of Nature Based Solutions (NBS) to support treatment of stormwater pollution and mitigate floods.

Kunshan has many manufacturers of trade logistics, automotive components and electronic materials. It is also an industrial base for the production of circuit boards and is a national agricultural demonstration area. As a result of increased industrialisation, Kunshan has been ranked as the most developed county-level city in China. However, the rapid urbanisation and economic growth in the past few decades have seriously degraded Kunshan’s waterways.  The water environment that once defined the liveability of the city is now under threat. Catchment pollution, poor circulation and inadequate sanitation system, has resulted in the degradation of the water quality in the network of constructed canals. Moreover, due to the low-lying nature of city and poor drainage system, it is under high risk of frequent inundation.

It has become important for the stakeholders to develop a city-wide strategy that can reduce the urban pollution in regional waterways and improve the quality of water, as well as mitigate the risk of floods in downstream cities. It is significant to ensure safe and uninterrupted water supply in the context of increased urbanisation and burgeoning population while reducing the level of dependency on external water resource.

The solution to Kunshan’s water problem is to build sustainability and resilience to address climatic uncertainties and to rehabilitate it into a water-wise city which includes a more healthy and liveable environment.

Nature-based solutions support treatment of  stormwater from Kunshan’s canal which is then returned to the city. The basic strategy that has been adopted is the collection of wastewater to the centralised water-treatment and proper management of diffused stormwater pollution at the source with the help of bio-filters which is then recycled for non-potable use, thus transforming Kunshan into a water supply catchment. This is coupled with canal water recirculation through precinct scale wetlands in the open spaces thereby making Kunshan a sponge city.

Another aim is to enhance and protect the waterways and canals by improving the natural drainage systems in urban areas and ensuring through the bio-filters that the peak flows are detained and safely transferred to waterways. This idea has been carried out at macro- and micro-levels with multifunctional areas combining grey, green, and blue infrastructure as integral parts of the urban ecosystem.

Kunshan has involved different public and private sectors to gradually transform the city into a water-wise or sponge city, structurally and institutionally. The project has benefitted stakeholders across the city and brought positive outcomes for the environment. Kunshan has not only achieved infrastructure improvements, but also gained the knowledge and technology that will benefit the city in the long term. The ecosystem services embedded into Kushan’s landscape have improved the connectivity of landscape, increased biodiversity, and improved water quality. It has allowed the city to self-repair by influencing the micro-climate. This city-wide strategy has also saved downstream cities like Shanghai from the risk of floods and has reduced pollution into regional waterways.

CRCWSC collaborated with Kunshan city in this transformation and helped in mainstreaming of water sensitive principles through demonstrating proof-of-concept approaches, providing a testing ground for translating discovery research into concrete products and created a market for water sensitive urban design expertise. 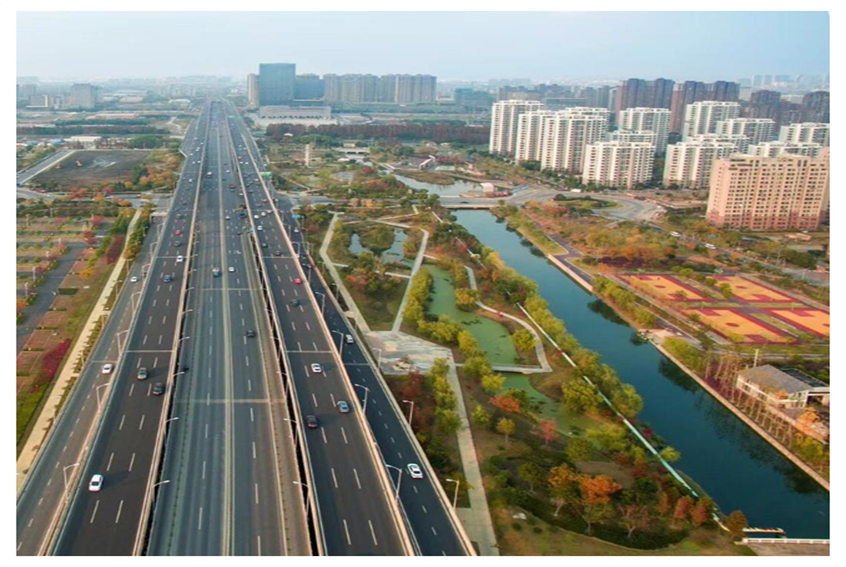 City of Kunshan has worked together with stakeholders to use nature-based solutions to embed four elements—culture, water, food, and forest—into open spaces, and create an urban mosaic of ecological landscapes. The Kunshan project, through its strong international, business, and academic collaborations with other partners, aspires to develop and deliver a master plan for the city which is aimed at improving the water resilience of city. The use of water sensitive principles can effectively improve the sustainability, productivity and liveability of a city.

The city was recognised for its efforts to make cities more liveable, in 2010, when it was listed for the UN’s most prestigious award in human settlement development, the United Nation HABITAT 2010 Scroll of Honour. In 2016, Kunshan was named one of China’s Ecological Landscape Garden Cities for its matured infrastructure, clear strategy, distinguished water character and concept of advanced ecological development.

In the next step, a three-party MoU was signed between KCID (Kushan City Construction Investment and Development Company), Planning Bureau of Kunshan and the CRCWSC, that presented a combined commitment of city agencies to extensively use their future projects as incubators of new design concept, new technologies and planning that are generated out of the CRCWSC. It obligates Kunshan to plan and resource at least one major integrated project for investigation with the CRCWSC. Potential projects can include design and construction of public ecological landscapes such as parks, waterway restoration methods, city and peri-urban planning, and flood management strategies.