Chronic kidney disease of unknown etiology (CKDu) has been a critical health concern, particularly in the North Central Province of Sri Lanka for two decades. Glyphosate [N-(phosphonomethyl)glycine] was the widely used herbicide in Sri Lanka until banned in 2015 for agricultural practices and is underpinned to be a triggering agent for CKDu. Glyphosate is commercially available as Roundup® in Sri Lanka. In comparison to other herbicides applied in agricultural practices in Sri Lanka, Roundup® was popular due to its high efficiency and effectiveness in weed control and low toxicity to non-target organisms. Ingestion of water contaminated with glyphosate and glyphosate-metal complexes formed subsequently with calcium and magnesium ions present in hard water is implicated to be instigating CKDu. The presence of glyphosate in Sri Lankan agricultural soils and potable waters in the CKDu prevalent areas has been still debating among the scientific community. Since there had been no evidence to showcase the glyphosate levels present in different matrices of the environment (soil and water), a comprehensive study was undertaken by the University of Moratuwa to investigate the presence and persistence of glyphosate in the CKDu prevalent areas. The mysterious new form of chronic kidney disease strikes mainly poor, agricultural areas in the tropics. It takes its heaviest toll in Central America, but it has now been reported in other regions. G. GRULLÓN/SCIENCE

It is the common practice that Roundup® is applied to the agricultural lands at the final stage of the dry season with the expectation of imminent rainfall events at the onset of cultivation season. In the CKDu prevalent areas, ground or surface water contains elevated hardness levels (more than 250 mg/L as CaCO3) and is often used to prepare the Roundup® solution. Use of water with elevated levels of Ca2+ and Mg2+ ions results in the formation of complexes of glyphosate with Ca2+ and Mg2+ ions. The formation of glyphosate-metal complexes decreases the ability of glyphosate to kill weeds, thus declines the activity and effectiveness of Roundup® in the field. Therefore, farmers tend to use higher doses of Roundup® mixed with hard water than what is required to control weeds to the expected levels. Consequently, in regions where there exists hard water, there is a propensity for higher levels of glyphosate to be present in the agricultural fields. The typical half-life of glyphosate (dissolved in freshwater devoid of high hardness levels) in soil and surface water is in the ranges of 2-215 and 2-91 days, respectively. Nevertheless, the half-life of glyphosate was reported to have increased even up to several years due to the substantial stability of glyphosate-metal complexes formed in hard water, making it less bioavailable for degradation. Therefore, the use of hard water in dissolving and preparing glyphosate solutions possesses a profound risk of higher persistence of glyphosate in soil and water. 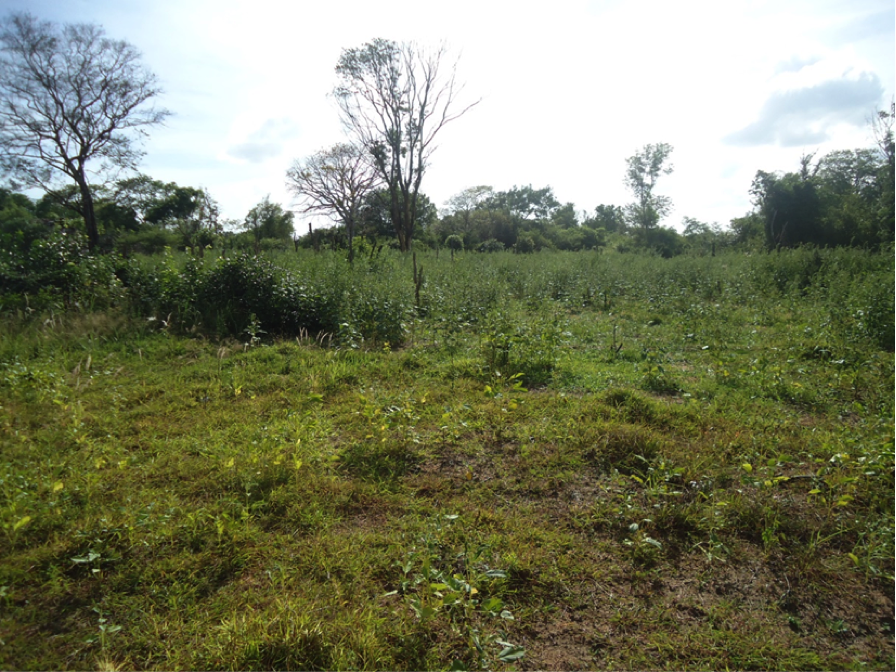 Agricultural land: at the end of a cropping cycle and before glyphosate application for land preparation for the next cropping season

Glyphosate is often applied to wild vegetation during which a certain fraction comes into direct contact with the underneath soil matrix in the form of a thin mist. Moreover, a similar contribution of glyphosate to the soil could be expected with the rainfall, as water drifting from the leaves and vegetative parts containing glyphosate and dead plant materials. The fate of glyphosate in the soil is attributed to mineralization, microbial degradation, retention as it is, and leaching to water. In general, glyphosate is degraded via soil microbial mechanisms into its major metabolite; aminomethyl phosphonic acid (AMPA) and the typical half-life of AMPA in soil and water are in the ranges of 60-240 and 2-91 days, respectively.

Field studies carried out disclosed that glyphosate (270-690 µg/kg) and AMPA (2-8 µg/kg) were present in agricultural soils in the CKDu prevalent areas. Presence of high valence cations such as Fe3+ and Al3+ in topsoil resulted in the formation of glyphosate-metal complexes; thus strong retention of glyphosate in high levels was observed in the topsoil of agricultural fields. Lower levels of AMPA (two orders of magnitude) than the corresponding glyphosate levels in topsoil could be attributed to the factors such as the strong adsorption of glyphosate to the soil making it less bioavailable and low microbial activity in soil because of prolonged exposure to herbicides that are toxic to microbial growth. The glyphosate levels of surface water were between 28 to 45 µg/L; no AMPA was detected. Trace levels of glyphosate (1–4 µg/L, 10-fold lower than those of surface waters) and AMPA (2–11µg/L) were detected in groundwater.

Glyphosate has a water solubility of 11.6 g/L and also strong affinity to be adsorbed to the soil particles (log Koc = 4.34 and Kd=61 g/cm3). Therefore, glyphosate applied at the field has less potential to get dissolved and remain in the water but has a greater affinity and potential to be adsorbed to the soil matrix and retain in the solid phase. Evidence from field studies shows that glyphosate was present in remarkably high levels in agricultural soils and trace levels in potable water in the CKDu prevalent agricultural areas in Sri Lanka. Such high levels of glyphosate retained in the soil (even after ten years from the last field application of glyphosate) have the potential to leach out from the topsoil of the agricultural lands subsequent to single and multiple rainfall events and also followed by application of phosphate-rich fertilizers. In other words, glyphosate retained in the agricultural soil remains for many years (even more than ten years). However, the fate of such glyphosate retained in the topsoil remains a mystery, as no long term studies are conducted. The degree to which such glyphosate be mobilized from soil to water and the influencing factors triggering glyphosate mobilization would, therefore, be critical aspects to be investigated to circumvent CKDu being widespread in the Sri Lankan agricultural areas.

Catalysing Partnerships Through the Energy-...

Recognising the complex linkages between water-energy-food is not new, but more and more attention is being focused on how to optimize and promote inter-sectora...
AgricultureClimate changeEnergyIndustrySocietyUrbanisation
Dan Wang December 9, 2014

Blue Sky Thinking at the Nexus Dialogue on ...

The interdependency of water, energy and food – the nexus – is one of the critical issues of our time. The Water-Energy-Food Nexus Dialogue recently held ...
AgricultureClimate changeHealth
Marta Jimenez September 17, 2018

The UN reports that the world is currently not on track to meet Sustainable Development Goal 6 by 2030. What’s your assessment? The challenge with SDG 6 is th...
Sorry ! This author has no more posts.