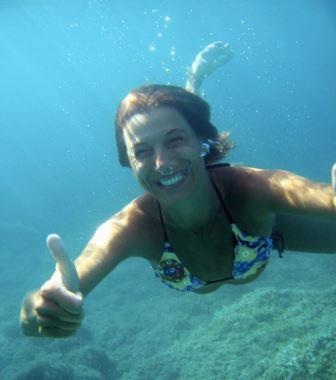 uly 1982, a young Italian girl dives for the 8th time from a rock of the Enfola beach in the crystal clear water of  Elba, the protected island of the Tuscan archipelago. To catch her breath she decides to lie on the surface. Enchanted, she lets herself get carried by this sea with which she has the sense of oneness. This feeling will stay with her for ever.

At the same time, a few miles away from there, on the Corsican beach of Propriano, a young Breton clings to the wishbone of his Dufour windsurf and manages, for the first time after 40 unsuccessful attempts, to move a few meters with the only help of the wind.

The thrill of the ride will stay with him for ever.

That same day of July 82, when the young Italian girl returns from the beach to the family home, there is no more tap water. The water reserve has been used up by the thousands of tourists. Four years spent in the very deserted Kuwait have accustomed her to cope with this constraint. But this is the first time she has to fetch the precious resource at the fountain of the neighboring village.

It’s time for our young Breton to go back home to continue his holidays at the Val André, a Breton seaside resort on the bay of Saint-Brieuc, where his family meets every summer. A preserved coast where he will be able to pursue his dream of becoming a windsurfer. Let’s hope that a new Amoco Cadiz – which, four years after having triggered one of the greatest ecological disaster, continues to leave its damaging mark on the Breton  coast – will never occur again to devastate the precious water! 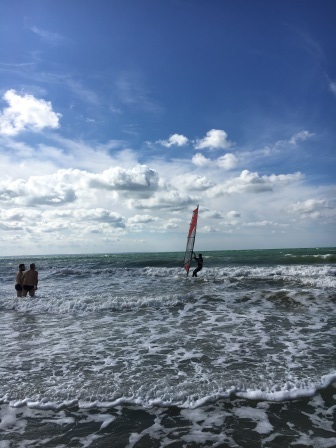 Much later, in the mid-2000s, after having crossed different life experiences, they met in Paris. Barbara and Stephane would finally drift to the same beach after she had experienced a tsunami named divorce and he, the loss of his father. They cling to one another as one clings to a life buoy. Yet during all these years and storms, the feelings and thrills they experienced with water in their youth remain intact.

Their passion for water and its regenerative power strengthen their bonds and bring them closer together.

Together they visit the Greek island of Santorini. They discover a unique blue water but also the sad effects of the human footprint. Many plastic wastes disfigure the beach and  the quiet sea. With no hesitation, they collect all of them under the curious eye of the tourists  and then go for a swim with the nice feeling of having restored -though in a short-lived way- the beauty of the sea. An episode that, unfortunately, would repeat again on other shores, other rivers … but which would awake in them a need to act!

More recently in Paris, another trigger was when they went to watch the documentary ‘Demain le film’  (which means  ‘tomorrow, the film’ ) directed by Cyril Dion.

The film portraits a series of responsible and sustainable initiatives run by regular citizens all over the world, in the fields of agriculture, economy, education, society etc…

At the end of the film there was a spontaneous standing ovation in the cinema (and yet the film director was not there), people applauded for 10 minutes with no break and had a positive and engaging feeling as if they were and could be part of this movement. It gave them hope that each and everyone of us can contribute positively to the change.

This is when the Aquamour project was born: to love water is to love life, taking care of it is vital, let’s move! Stéphane & Barbara decided to go around the world in search of encouraging stories and images on water to call for action, restore hope and love.

‘Now it is time to do something positive for the planet and for the children!’

Some responsible people act around the planet and yet they are not very visible.

We wish to highlight these people in different parts of the world, to show through concrete and sustainable initiatives, that every citizen of the world can have a positive impact for the preservation of water.

We aim to raise awareness of this vital issue among the general public, and in particular the young people, by showing the beauty and benefits of water as well as by highlighting the actions in favor of its preservation.

Aquamour from Sensi Ateliers on Vimeo.

During our round the world trip for the protection of water in all its forms, we will post videos of interviews and photos on instagram : Aquamour20 and youtube. Coming back from our trip, we will run conferences and workshops designed for young people, as well as produce a long film to make our initiative sustainable.

Whether they are researchers, small fishermen, volunteers committed to its preservation, advocate of the benefits of water on body and mind, artists or others, whatever their scope of their actions, their message or their creations, these  ‘aqua-heroes’ will show us the way to save water from human madness.

– Adi Lustig fights for the protection of the endangered Palmachim beach in Israel.

– Victor Kossakovsky, a Russian director, has just produced ‘Aquarela’ a spectacular documentary dedicated to the power and beauty of water.

– Ngāti Tama, Iwi tribe, guard the Pupu springs (dancing waters). They are sacred waters and the health of its crystal clear waters is central to their spiritual and cultural wellbeing. Protecting it is more than just keeping it pure. It’s a responsibility passed down to them through the generations that came before.

– Werner Kornexl, is an expert in natural resources management for the World Bank in Cambodia

– Mina Guli grew up in a dry part of Australia, she gave up her job as a lawyer to dedicate her life to water preservation. She decided to run 100 marathons in 100 days to promote water cause around the world.

We are creating an Aquamour community who is supporting this project.

If you wish to join us, you can, by giving us relevant contacts, sites to visit, by hosting us or following and sharing our communication on social networks.

We are two water and travel enthusiasts. We have both a background in communication and marketing. We enjoy story-telling, through conferences and workshops on creativity for Barbara, and corporate films and TV documentaries for Stéphane. We think t... Read full biography
Society
Ger Bergkamp November 19, 2014

The “Lisbon Charter” offers a vision for reforming water management for sustainable development Water is considered to be the greatest risk facing the world...
Society
Kirsten De Vette March 17, 2015

One of the IWA’s strengths is in our diverse membership; from different countries, professional roles, educational backgrounds, age and gender. This mix ensur...
DevelopmentHealthKeynotesSociety
Guangzhe Chen October 2, 2017

Maximising Financing for Achieving the SDG ...

Since 1990 an additional 2.1 billion people worldwide gained access to improved sanitation and, 91% of the global population now use improved drinking water sou...
Sorry ! This author has no more posts.